Perception Is Reality in Your NYC Food Sanitation Grade 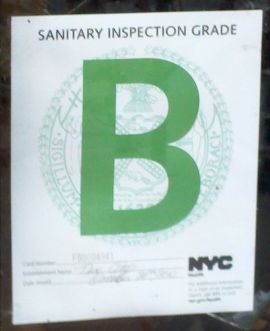 Besides in my kids’ father’s house and some graduate school programs, the answer is “when the NYC Department of Sanitation comes around to inspect your restaurant for cleanliness”.

But a B is a passing grade when the restaurant police come calling. In fact, a “C” is a passing grade, too. But in a world where perception is reality—and this one sure is—you’d better not get anything below an “A”.

Why do I bring this up, here? Because The NYC Department of Sanitation has unveiled a business change that’s going to help create a healthier food service environment by putting dirty restaurants out of business. Not business change, you say? Read on …

Up until recently, restaurant inspections in New York City were graded pass/fail. I won’t try to explain what qualified as acceptable to the NYC Department of Sanitation before, or now; the rules are what they are, and your ability to keep your restaurant open depended and depends on whether the Sanitation Inspector thinks you deserve that right.

I talk about the idea of “Perception is Reality” from time to time, such as in this piece where I related Google’s perception of your website’s speed as one indication of your SEO Reality. By adding letter grades to the way the Department of Sanitation grades restaurants in NYC, the sanitation inspector’s decisions may have become less important that the perception passers-by have of the new reality. Here’s the story:

Under the business change the new system has created, what used to be “Pass” is now split into three letter grades. You get an A, B, or C depending on a ranking system, and if you fall below the criteria for a grade of C you get a “Grade Pending”. Grade Pending really means you failed, though, and the health inspector will return soon to make sure you’ve corrected the problems. If you haven’t, you get shut down.

There are two differences that accompany the new grading system for restaurant sanitation in New York City.

First, whereas under the old system restaurants were allowed to post their Pass/Fail grade in a dark corner, they now must post the grade, A, B, C, or even that euphemistic Grade Pending where it can be seen from outside the restaurant. That’s the literal business change; here’s the business change that matters:

Even though Grades of A, B, and C all represent states of cleanliness that are acceptable to the NYC Department of Sanitation and always have been, the perception of this reality is that anything less than an “A” is  unacceptable.

That’s REAL business change. And it’s why perception truly is reality; if I perceive that a restaurant with a “B” isn’t clean enough I’m not going to eat there, and since most people don’t know how the old system worked, that’s the perception this system fosters.

The good news is that the new system has the potential to create not just the business change of perception, but a realty-based business change under which restaurants have a reason to care even more about their cleanliness.

And that’s a win for everyone.

FOLLOWUP, April 21, 2011: I’ve just discovered that there’s a secondary meaning for the “Grade Pending” grade being used by the NYC Restaurant/Sanitation/Board of Health system. If a restaurant gets graded “B” or “C”, they have the option of requesting a re-inspection and displaying a “grade pending” sign next to their “it-wasn’t-an-A” grade. The idea behind this is that a restaurant that displays both the less-than-ideal letter grade and a “Grade Pending” is saying “we care enough about you, our customers, that we won’t proceed with business as usual when we have less than an A”.

Nice Customer Service on that one, wouldn’t you say?