Rate Everything (Because Nobody REALLY Cares) — Jotly

A few months ago, I came across this video. It’s funny. REALLY funny. Using not-a-real-App Jotly, you could rate everything. Why limit yourself to rating the place you’re at when we all know that restaurant reviews are fake, anyway? With Jotly you just … Rate everything.

Except, of course, for this: Jotly wasn’t real. It was a parody of all the rating/check-in/self-promoting web sites and apps that have become part of our daily lives, where we keep talking but say nothing. Rate Everything, indeed; we’ve been doing that anyway, so Jotly was just calling it like it was. We should rate less.

No more. Jotly is real. And as of this writing (it will drop now that I’ve stopped playing with Jotly) I’m the 41st highest ranked Jotly user: 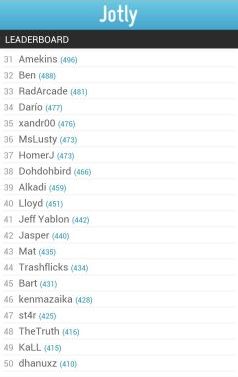 You can check out my Jotly feed, here. But honestly, I can’t imagine why you’d bother. Jotly, aside from its unfocused, rate-everything methodology, is literally about taking pictures of random things, giving those things a grade, and moving on. Rating everything, as you might have imagined, is narcissism at its worst. And at Jotly, you can’t even rotate those silly pictures.

Except … there’s a business case. The guys at Jotly are actually pretty brilliant.

“Rate Everything” notwithstanding, and given that without the context a Foursquare adds to your random musings (“I’m here now!!!”), the idea behind Jotly is just aggregation and volume … and getting others to develop software using their tools. Jotly has released an API (Application Programming Interface), and once the novelty of Rate Everything has run its course Jotly is hoping many other people will have written Apps that they can be the service point for.

Which, if you think about it, is the same model Facebook is following for its expansion beyond where it is today.  It isn’t enough to have people come to your App or web site; you need to get others pointing people there. Rate Everything? Hardly. This game is called TAKE Everything.

I’ve been telling you about how important Social Media and Social Networking are for several years. You’ve been paying attention, right? You see the business change that “the socials” bring about? You know that you can be held accountable for your tweets? And that the way people see social media and social networking keeps changing?