Thank you, AT&T, for saving us from the spectre of huge data costs when we go over the limit on our SmartPhone plans, and for instituting a business change that both makes sense and will be fair to everyone.

OK, strike most of that. AT&T has a new idea for wireless data pricing that, while absolutely qualifying both as business change and a business change plan that makes sense in its way, isn’t really going to benefit anyone except AT&T, and other really large companies.

Yesterday, the title AT&T’s mad, mad plan to charge wireless app developers on an article at GigaOM caught my eye. I would have read the piece even without that “mad, mad” part in the title, but it was those words that really got my attention. Just what could those crazy kids at AT&T be up to now?

Following through to the source piece at the Wall Street Journal, I found a more sanitized version of AT&T’s plans: a customer nearing his data limit for the month could be more likely to download a movie if the content provider covered the price of the data transmission. “It’d be like freight included,” says AT&T’s Chief Technology Officer, John Donovan.

Interesting idea. And not entirely off the mark as either a business change or a “we’re-running-out-of-wireless-spectrum and need to do something!” idea.

And of course, not really the point to AT&T, either.

AT&T, as is their right, is looking for a way to make more money. With the cost of data-limited SmartPhone plans already pushing $100 per month in the USA, it’s becoming harder and harder to get consumers to accept new rounds of price hikes. But AT&T and other wireless providers need to deal with the dual realities of running out of wireless bandwidth spectrum and needing to create more revenue from the bandwidth they have. So why not have the folks who develop Apps pay some of the freight for delivering the data that the Apps use?

Two problems. One is moral, and in a pragmatic business change sense won’t ultimately mean anything. And the other is legal … unless it turns out not to be. My head hurts, already.

The pragmatic/moral/business change issue is pretty obvious. Telling Netflix that they’ll have to pay to deliver a movie to a subscriber is simple; Netflix is a huge company and will find a way to recoup the new expense line item they need to take into account whenever wireless users download movies. But put that same burden on a smaller company and things look different: 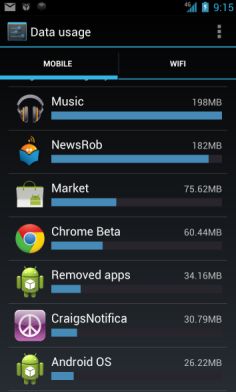 As you can see, most of the Apps running on my Galaxy Nexus that are consuming big data are from big companies. This is a picture of what’s run through my Smartphone in the week or so since my billing cycle turned over, and A) Google Music is my biggest data hog, and B) I have unlimited data on my plan, so for me, this is mostly a moot point.

But you see that entry near the bottom for Craigslist Notifica(tions)? It’s an App from Mufumbo Labs, a company I’ve never even known the name of until I went looking just now. Mufumbo is not affiliated with Craigslist, and the only revenue they derive from Craigslist Notifications is what they can generate through in-App advertising. I use Craigslist Notifications continuously, and have never clicked an Ad I saw in there, so do the math … it’s pretty unlikely that Mufumbo Labs would have an easy way to pay my wireless carrier for the 125 MB or so of data that their App pulls down for me each month.

So a lot of small companies go out of business. Again, this isn’t really AT&T’s problem, and might even be part of their plan; dealing with the tens of thousands of small companies constantly trying to piggyback on you can’t be fun for large ones. But it’s also where this crosses over to the legal part of the problem with AT&T’s plan to charge App developers for the data their users consume.

We have a quasi-legal tenet in the USA called Net Neutrality. Net Neutrality, in short, makes it illegal for telecommunications providers to favor the data one user sends over the data being sent by another. There are ways around Net Neutrality, of course, such as charging more for “better” service, making customers in different tiers of service … different.

But Net Neutrality, so far, doesn’t apply to wireless carriers. Verizon and Google made sure of this a couple of years ago, when they simply proposed and started using new rules rather than waiting for the FCC to create them. And the FCC hasn’t addressed wireless Net Neutrality—and likely never will.

So kudos to AT&T for having the chutzpuh to start blazing this trail. But I sure hope they run into construction problems, and if you’re running a business I hope you see the problems and feel the same way. Because if AT&T pulls this off, that next Cute Kittens video you watch on YouTube might end up costing you a lot more than just the time you waste.