The Storage Wars and Google Drive

Yesterday I promised to tell you everything you need to know about Google Drive. GDrive is a subject that been tossed around literally for years; we all knew Google Drive would show up eventually, and if “storing your stuff on line” was the only thing that interested you, it’s possible that you figured out how to create a virtual “Google Drive” years ago by putting your files into GMail.

From the moment Google Drive was announced on Tuesday, it was discussed, analyzed, sliced, diced, and flipped on its head by every technology pundit around. And Google Drive is a big deal. It’s one more way for you to get all of your stuff done, flexibly and without the need to figure out what yet another new thing from another company does and how to use it. Woo Hoo!

You know . . . as long as you trust Google and are willing to put everything you own in their hands.

I don’t actually have a problem with the “trust Google” thing. From a technological standpoint I have near-total faith in Google’s ability to keep all the things they want to run alive and secure. I have absolutely no reason to believe that Google Drive will be discontinued by The Big G. And as for privacy issues, I’m pragmatic on the topic. Unless you go completely “off the grid” (and you’re reading this, so, never mind that option), Google knows pretty much everything about you, anyway, so relax.

I’m a little bit concerned about Google’s Terms of Service, which in the case of Google Drive might be interpreted as meaning “if you keep your documents in Google Drive they belong to us”, but let’s assume that in the long term that isn’t how things shake out. In fact, Google’s introductory video for Google Drive might be too spot-on on this topic (note that I’ve cued the video to the point I’m talking about; you can restart it from the beginning if you like) :

“Just Share Them With Drive And Everyone Has The Same File, Automatically”

So what the deal with Google Drive?

Google Drive, as my old friend Rafe Needleman points out, is one of many cloud storage-and-sharing options. I’ve played with most of the products Rafe talks about in that piece, and I’ve happily claimed my little piece of several of the clouds he refers to, but I keep coming back to the one I’ve used for several years. I’m a Dropbox user. Dropbox works exactly the way a cloud file storage-and-sharing application should work, and for me Dropbox did away with the need to carry around a USB stick to transport my important files from computer to computer before “The Cloud” even became an overused, under-understood catchphrase.

And that point stands in the way of me wanting to use Google Drive. Regardless of the many very cool things about Drive, I’m comfortable with Dropbox. Google took about five years too long to introduce Drive, and I’m already happy elsewhere. It’s very much the same as when alternatives to PayPal started cropping up, the difference being that Dropbox is every bit as great now as it was before Google Drive came along.

But there are great reasons to take Drive seriously.

First, the simple act of turning on Google Drive in your Google account increases the amount of storage Google allots to your Gmail account. This might seem unimportant, but it signals a change in the way Google is doing business with us. Gmail was previously an ever-growing storage resource, but turning on Google Drive increases your Gmail storage allocation from seven-ish gigabytes to ten. I’m guessing that not very many Gmail users care about that specific two-plus GB of extra storage, but “Google just keeps adding storage space to my Gmail account” seems to be over.

Fascinating. As with Google Music, Google just wants you to use their stuff and will reward you if you do.

Google Drive, in fact, subsumes Google Docs; Docs is now a part of Drive, meaning that Google Docs needs downloadable file formats of its own; I noticed them right after I installed Google Drive:

So with “of course the documents and drives go together” and the security and privacy issues covered, let’s talk about the subject of Dropbox versus Google Drive.

If you read that piece by Rafe Needleman, the unavoidable conclusion is that there are plenty of places where you can get cloud storage. There are differences between what each of them provides in their free packages, and all of them have premium plans if you need more storage; in some cases you pay just to get the full suite of features. Well, for me, until Google Drive came along none were worth considering besides Dropbox.

Dropbox just works. You install a piece of software in each of your computers, and it turns a folder into your Dropbox repository. So long as you have Internet connectivity anything you put in that folder gets replicated both to the Dropbox servers and to each of your other computers or SmartPhones. What this means, aside from it being so easy that you never have to give the process any thought, is that you automatically have as many backup copies of the stuff in your Dropbox folder as you have devices attached to your Dropbox account, plus the extra copy on the server.

Google Drive works exactly the same way, with the added benefit of the Google Docs platform, which is getting to be almost good enough that most people can stop bothering to buy and install Microsoft Office or another office suite. And if you’re starting from scratch, that’s a great set of reasons to go with Google Drive over Dropbox. But here, as always, starting from scratch can be a pretty serious limiter.

I’ll illustrate that by showing you the preferences dialogs from Dropbox and Google Drive: 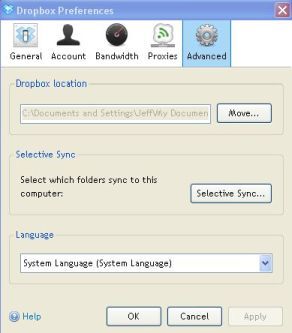 Aside from the amount of control over the way Dropbox operates that the multiple tabs hint at, do you see that “Dropbox Location” option? You use it to tell Dropbox where in your computer the special folder should be. Now, here’s Google Drive’s preferences dialog: 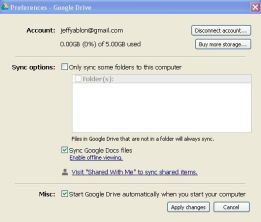 Almost no user control, and . . . you guessed it . . . you’ll store your Google Drive folder where Google says you will.

In other words, despite the incredibly long time Google took bringing out Drive, it still feels a little bit immature.

Maybe Google Drive is good enough that its warts don’t matter. Maybe you have no concerns about Google and Privacy or Google as a monopoly. For that matter, maybe you think computers are too hard, and leaving so few options open to user decision is a good thing. I sure won’t argue with that one; it’s been the focus behind how I’ve made a living for a very long time.

But for now, I feel like moving from Dropbox to Google Drive just doesn’t make sense. And that’s the whole story. Dropbox and Google Drive are the players in this game, and for a variety of reasons one isn’t very pretty.

Wanna talk some more about computers and business change? You can reach me here.