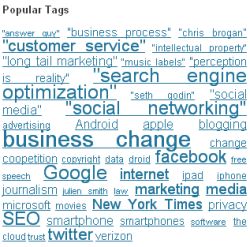 Do you ever wonder what’s really important to people you speak with, or whose words you read?

The subject of authenticity is one that gets tossed around quite a bit, and on the Internet, where we’re bombarded with opinion after opinion from a plethora of sources who’ve earned various amounts of our trust in differing ways, it’s becoming an ever-hotter topic.

Who can you trust?

Cynically—or perhaps reality dictates that I should use the word “pragmatically”—the answer is “nobody”. But that’s a problem; trust nobody, and your life becomes a continuous cycle of looking over your shoulder and getting nothing done. Business change sure isn’t going to happen if you spend all your time that way, and your personal life is going to be a lot less fun, too.

The more people talk about authenticity the more inauthentic they seem. My girlfriend tells me that each time I tell a prospective client that he can trust me, I’m actually eroding the trust I seek to establish—and she may be right. But because I know I won’t ever screw over a client I feel almost compelled to say so. I feel as though I’m being authentic by broadcasting my enthusiasm.

Buy that argument, or don’t.

For adults, sadly, transparency can’t mean “just throw everything out there”. About the closest we can come is by, for example, showing you our tag cloud at the top of this piece, where you can see in stark reality exactly what we talk about at Answer Guy Central. With over 700 articles in our archive, showing you what we talk about most and letting that information stand on its own merit is about as raw as it gets.

Oh: and I guess I read The New York Times a bit too much.

You know you can’t trust the Facebook guys or their bankers. But you didn’t need to see Zuckerberg and Company leave no money on the table in the Facebook IPO to know that; you just knew. Similarly, people who read “Mommy Blogs” just know—or at least believe—they can trust those Mommy Bloggers, because MommyBloggers seem authentic.

Authenticity doesn’t happen until you’re so open, transparent, and unafraid of failure that you simply do what you think is right, and you do so unapologetically. Steve Jobs lived this life. Chris Brogan tries to be authentic, and has a huge following that buys in. The Verge? About as inauthentic as it comes.

I seem to be doing some of that rambling that I mentioned above. Please bear with me.

I stumbled on this post last week. I don’t know Michelle Agner, but something caught my attention. That something was her authenticity. I trusted Michelle immediately, despite the fact that she seems to just be getting started with tools like LinkedIn (84 connections as of this writing) and Twitter (114 friends and followers). Michelle, you now have three links here.

In Michelle’s piece I came across a shout-out to Julien Smith, and a link to a new piece by Julien. As you might know, I have lots of great things to say about Julien Smith, and the authenticity bell Michelle was ringing on Julien’s behalf started clanging in my head. Sometimes the more you talk the less you say, but read Julien’s piece on connections and you’ll see that this is no hollow social networking.

And then, there’s this piece.

Ironically titled So Much for Authenticity, it’s by Mark Schaefer, a guy with a marketing blog that I’ve been reading for about a year. I’ve written about Mark’s blog, too, and Mr. Schaefer and I have traded comments. So imagine my surprise when I commented on Mark’s “authenticity” post and the comment was deleted!

Now admittedly, my comment might have been viewed as  authentic, but I was on-topic and participating in the lively discussion that Mark had asked take place. Here’s that comment:

I’m guessing you saw Vaynerchuk. (If not, I’m sorry, Gary).

The authenticity conversation is maddening.After seeing Chris Brogan wax prolific on the topic a while back, I wrote this: http://answerguy.com/2011/08/16/authentic-honesty-chris-brogan-marketing/ .

The question is … does anyone actually want you to be authentic, or is that just so much lip service to an ideal we’ve had crammed down our throats? Listen, I’ll make this simple: much more often than not, when I write a post I end it with something that sounds like “we do this kind of work and we’re great at it, so hire us!!!!!” And I’m being authentic; we do what I say and we’re . . .. . . good at it.

And I’m painfully aware that if you SAY you’re great, you’re often viewed as likely to be not. Or at least, a big blowhard.

I suspect that the speaker you saw is vulgar in the way you describe because he thinks it’s what’s expected of him. Or because he doesn’t really have much to say.

But either way, it sounds authentic to me.

If I guessed wrong about the speaker Mark was talking about, he could have set me straight. And in the context of the discussion that would have been the authentic thing to do. But instead, Mark deleted my words.

It’s Mark Schaefer’s blog, and Mark Schaefer has the absolute right to moderate it as he sees fit. And sure, I had an agenda; I wanted to be heard, and I would have liked for the link I seeded to one of my posts here to live on forever at BusinessGrow.

But deleting that post? Well, So Much For Authenticity is right!

In the Internet Age, Business Change requires that we trust ourselves enough to believe that people who might be momentarily distracted will return. In marketing, that’s a tremendously atypical message. I’m standing by it: tell everyone what you’re great at, and encourage them to seek authentic counterpoints.

Because in a world where connections are all that matters, if you’re authentic, they’ll always come back.