I’ve long had concerns about the way patents and trademarks are issued. And while I confess to knowing very little about the systems in place outside the USA, I understand how things work here well enough that one of the things you can hire Answer Guy Central to do for you is Intellectual Property Consulting.

Yesterday, a court in the UK ruled that the Samsung Galaxy Tab, one of the many Android-based tablet computers, doesn’t infringe on Apple’s iPad patents because . . . I’m not kidding . . . the Galaxy Tab “isn’t as cool as the iPad”. 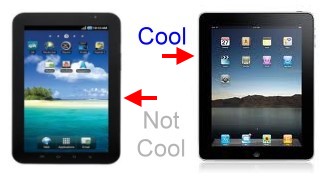 I agree with the statement about the Galaxy Tab’s relative lack of coolness compared to the iPad. That’s OK; I’m more interested in tools than toys, and as cool as the iPad is . . . and it is . . . I don’t see an item’s coolness as terribly important beyond the ability to sell it.

The legal ruling is what I find fascinating—and with any luck an impetus for business change in the patent wars that are going on all around us. Coolness factor as a means for deciding a patent dispute notwithstanding, the point the judge in this case was making is that nobody is going to mistake a Galaxy Tab for an iPad, so with regard to look and feel disputes or infringement of trademark, Apple’s been shot down . . . hard.

Nobody is degrading any trademarks by mistaking Joustin’ Beaver for Justin Bieber, to point out a similar issue.

While something as subjective as “look and feel” is a difficult thing to base broader legal precedent on (disclosure: I am not an attorney), I see this as potentially a great blow to Apple, which lately has been suing Samsung everywhere they can over anything they can think of, as well as a blow to patent trolls everywhere.

Software patents, which is where most of the issues between the Galaxy Tab/Galaxy Nexus and iPad parent Apple arise, are a very bad idea. They’re too difficult to wade through, often describe non-unique things, and let’s face it: Steve Job’s original design for the software inside Apple’s Macintosh computer was a wholesale rip-off of a design he’d seen as a teenager at Xerox’ Parc Research Facility. Ironic, then, that Apple’s become the biggest patent troll of all and how before his death just how indignantly Mr. Jobs spoke of Android ripping off iOS.

Intellectual Property needs to include something intellectual. With any luck, Judge Colin Birss may have just started us down a road to better patent laws.

I knew I loved the UK!