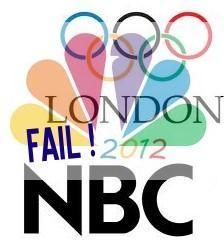 The graphic says it all. So does prevailing, vocal criticism on the Internet, especially at social media sites. NBC’s television coverage of the 2012 London Olympics has been a huge failure.

The cameras are working. The commentators are doing what commentators do, for better or worse. There’s lots of London Olympics 2012 on a handful of television channels, and as long as you have cable or satellite service all of those channels are “free”. But despite all those channels and the fact that you can get a live feed of every event over the Internet if you know how and fight your way through the small roadblocks to do that, NBC seems to think they’re still working in 1970. Or . . .  OK, maybe NBC just thinks it’s still 2008.

I realized just how badly NBC is handling the television part of their Olympics coverage on Saturday afternoon, as I was watching a live feed of the men’s 4×100 individual swimming medley on my Google Nexus 7 and an iPad. I started out really happy that I had found the race and was watching it live instead of waiting for that night’s prime-time tape-delayed television broadcast. And then as the day went on I realized just how happy I really was.

Sure, I felt great about my geek skills. Yeah, I was happy to have seen the race seven or eight hours before NBC showed it on television. And then a couple of hours later I picked up my SmartPhone and opened the App I use to track Twitter and read one tweet after another announcing the results of the race. They were all over my news feed App, too.

I never went looking for those tidbits of information. I was just moving through my life in the way that people do today, and it was thrust before me. And if you have a SmartPhone, or checked your email through a site like AOL, you saw that information too. Meaning that by the time NBC showed the race on television you already knew who’d won, who hadn’t, and everything else there was to know. And in practical terms there was no way to avoid this information.

And there’s a simple answer: NBC sells advertising in their Olympic Games programming, and the prime-time programming earns them more than they can make at 2 PM on the east coast of the USA and 11 AM on the west coast. That’s true on weekends, and of course is even more true during the week when people are at work.

And NBC should still be broadcasting the events people are interested in as they happen.

I’m not saying this from a position of indignation, but as a business change consultant. NBC wants to show the most important Olympic events during prime time? Fine, let them; they can put together a highlight reel for prime-time  broadcast; that’s what they’re doing anyway. The ONLY rationale for not showing the events live is that they believe they can get more people to tune in at night if they haven’t already seen the events.

Ratings aren’t out yet, but I’m pretty sure the opposite is happening. People are angry that they already know who the winners are, and are staying away from the prime time broadcasts in droves. This is just the latest example of media business hubris.

For the 2008 Olympics in Beijing, China, there was no live outlet for watching the Olympics on the Internet, and social media hadn’t become the pervasive force it is in 2012, for the London Olympics. Kudos to NBC for making everything—everything!—available live; imagine if Fox TV was smart enough to realize that they neither have nor deserve the right to tell their viewers which devices to watch television programming on. But by sticking to a prime-time-only broadcast television schedule for the “best” programming NBC is trying to keep a big genie stuffed in a bottle.

I love London, but I’m sure not loving the 2012 London Olympics. And it all comes down to a subject we’ve discussed here before, many times. Media companies are trying to protect archaic business models instead of embracing business change. Check it out:

The New York Times is becoming an outpost for bad blogging. And on and on and on. People don’t want to be told things any more; they want to participate in conversations and be heard.

Why this problem is most pervasive in the media business is a mystery; nobody likes change, and most companies fight it. But media companies—the people who should be best at working  through these issues— seem instead to be the worst.

Wanna know who won today’s events? You can wait for NBC’s London Olympics 2012 coverage on TV, or . . . just check your Twitter feed.