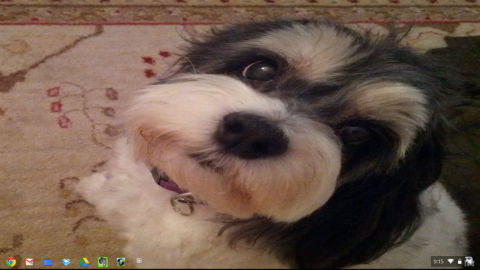 I’d like to introduce you to Reggy. She is, as you can see, very likely the cutest dog ever. And it’s a good thing she is, because Reggy is the desktop on my shiny new Google Chromebook computer, and I can’t cover her up with icons.

If you’ve used pretty much any computer using pretty much any operating system in the last couple of decades you’ll probably be struck by how clean my Google Chromebook desktop is. Is it because my Google Chromebook is new and I’ve not yet littered it with icons from all my programs, or stored frequently-used files right there in plain sight for easy use? Yes to the first part of the question, but no to the rest. In the latest version of Google Chrome (the operating system, not the browser), you can’t put anything on your desktop.

And that’s probably the most important thing I can tell you about the Chromebook. It . . . is . . . different, REALLY different. The Chromebook is perception/realty shifting business change of the highest order. And you’d better get ready, because this kind of change is in your future.

I picked up a Chromebook this weekend at my local Best Buy. I’m no fan of Best Buy, but after I convinced the salesperson there that I was worthy of one of the very few Chromebooks they had in stock I was able to lay my hands on one. It really does cost just $250. It really is a laptop that is the same size as a MacBook Air, but weighs a pound less. Its keyboard, although missing a few keys I’m used to and it turns out I use quite a bit, feels surprisingly good to type on, unlike my now-retired Acer Netbook. And its performance is, I’m not kidding, great. I have no complaints about the Chromebook, except that because it’s made of plastic it feels like it might not hold up to uncareful handling.

Oh . . . and that using the Chromebook makes me have to re-think some things I’ve done the same way since around 1991.

That last point would be a deal-breaker, and should be, except for a simple reality that we’ve been moving toward for a couple of years now. The old paradigms controlling how our computers work are changing.

I sat down at my Google Chromebook today to write this piece about the Google Chromebook, and it’s been harder than I would have liked. I had to find a way to capture and edit that picture of my desktop. I had to figure out how to get the picture to Answer Guy Central. I had to learn new ways of making copy/paste happen. None of these things were actually difficult, but using Chrome as an operating system in place of Windows, with a keyboard lacking an “insert” key, took thought. Making file transfer to the Answer Guy server took thought. Editing Reggy the Dog‘s desktop took thought.

And unlearning decades of Windows computer muscle memory wouldn’t be worth the effort, except that Microsoft is making that happen with Windows 8, anyway, and one day soon I’ll have no choice but to “upgrade”.

Some things about that are great, actually. Because an extended version of Google’s Chrome browser is the entire operating system in the Chromebook, the chance of ever having a computer virus burrow its way into your computer is reduced almost to zero. We’ve been headed in this direction for several years, and the Chromebook is the first computer to ‘make the browser the operating system’, for real. And while the Chromebook has a few gigabytes of storage on-board, using it can feel clumsy and defeat the purpose: you want as much of your stuff as possible in The Cloud.

In fact, this actually answers the question of who backs up your data when there are no files.

I asked my fiancée whether having to change the way she uses a computer bothered her. She’s a unique case; she recently switched from a Mac to a PC because we had a Dell laptop gathering dust and her Macbook had started developing problems. She was a staunch Apple person. She adapted. She also just started using a SmartPhone—in fact, an Android device, not the iPhone she thought she’d like. She adapted to that, too. But I also asked some other people, and they felt differently. Change? No way; I hate change!

Most of us hate change.  But change is being designed into our computing devices, and some time soon you’re going to encounter it. The question is, will you deal with change by kicking and screaming before you have no choice but adapt, or will you face change head-on by switching to a computer like the Google Chromebook proactively?

You know which choice I recommend. And of course, you know how to reach me if you want help.