‘Pics of My Homies’, and Artificial Intelligence at Facebook 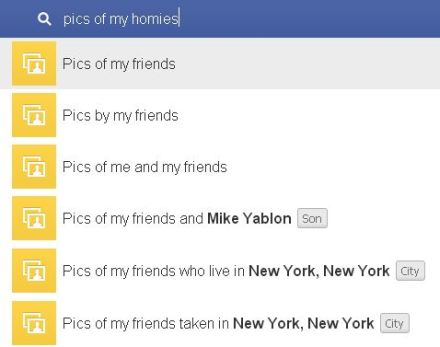 Are you one of the people who are still actually using Facebook? You’re not alone, of course, but Zuck & Co. see their pending irrelevance coming. That’s why they created Facebook Graph, a new way of searching Facebook that, when it works right, is a pretty neat tool.

I’ve been using Facebook Graph for a few weeks. I can confirm that it does a better job of finding quasi-useful stuff than any other method of getting around everyone’s favorite (and least favorite) social network. And this morning, this piece at Wired illustrated a bit about why.

This isn’t exactly a surprise, of course. Facebook’s traffic is about the same as Google’s and the competition between Facebook and Google+, regardless of whether Google+ is ‘a social network’ or not, is indisputable. But frank words from one Facebook engineer struck me:

“We make a lot of guesses,” says Sriram Sankar.  “We apply a lot of intuition… and we use a lot of data to verify that intuition.”

VERY Google. Very artificial intelligence. Up until now, Facebook, for all its size, has seemed like a handful of blunt instruments cobbled together. Facebook Social Graph changes that.

It seems they do. Spell homies in Facebook Graph ‘homies‘, and you get the results above. Spell it ‘homeys’ and the results that come back are useless. What I found fascinating was that Facebook Graph specifically called out one of my sons for inclusion in the search results (good job, Facebook; he’s the kind of person who uses that word, and has, on Facebook and elsewhere), and that the results included my location, which it turns out was a questionable call.

Facebook knows I’m in New York. It knows this because my profile says so, and it also knows it because when I sit at my desk and conduct a search Facebook knows where I am by looking at my IP address. So after I searched for pics of my homies from my desktop, I logged into a computer in California and searched for pics of my homies, again, from there.

This might be by design. But when you think about the idea of conducting a search for pictures of your friends then if geography is being assigned automatically it makes more sense to search by your current location rather than by an entry in a database.

And that’s where artificial intelligence breaks down. A.I. requires not only precise, fact-based knowledge, but transient, contextual knowledge too, or it doesn’t work well enough. This is the reason that Apple’s Siri is such a bust.

This is why Oprah seems to have a spelling problem. It’s why Android in your refrigerator makes sense—but only in a specific way.

In short, Facebook has part of this right, and they got it from Google: What People Do IS the New SEO. But the formula changes, almost constantly, because what people do changes.

And managing that is what Influency is all about. You need to understand the people you’re working with so well that you can almost guess what they’re going to do before they do it.

I predict you’re going to want to talk about this.