In case you’ve somehow missed this, we’re big believers in Search Engine Optimization. Let me be blunt: remove the “it’s snake oil” part of the conversation (and it isn’t), and the simple truth is that if you don’t optimize your presence on the Internet so search engines can and want to find you, you have a very big problem.

SEO, though, is not a panacea. It kind of was for a while; people who figured out early Search Engine Optimization strategies like keyword and tag stuffing pulled a lot of traffic for a few years, until Google and the other search engines got smart about how people could manipulate their algorithms. We work with one company that sells forklift parts (seriously, forklift parts; some businesses really are that specialized), and one of their competitors remains at or near the top of Google’s search results for the phrase ‘fork lift parts’, based on a web site they built and haven’t updated since 1996.

We’ve finally got that problem licked, by the way; and it took years.

What I’m saying is that Search Engine Optimization is a process, not a task. At least it is now. 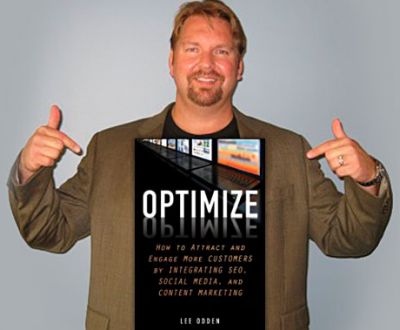 I don’t talk about Lee nearly as often as Chris Brogan or Seth Godin, but Mr. Odden is a marketing guy with a long pedigree, and he has come up here a couple of times before. He’s bright—really bright—and may rank right up there with Brian Clark as one of the smartest guys in business today. I mentioned Lee Odden as far back as 2010, and then a bit over a year ago Lee was the topic of this story on the intersection of Art and Science in Search Engine Optimization.

Lee’s 2012 book, Optimize, (buy the hardcover version here, or the Kindle e-book version here), wraps all of this together. It’s kind of dense writing, as several of the reviews point out, but get past that; Optimize says what matters—there’s a lot you need to tie together, whether you think of that as merely a statement about Optimization, or go broader.

A couple of weeks ago, Odden wrote a piece on the subject that I had to comment on. He asked the question in a way that I believe is wrong, though. Lee’s headline read “What Should Lead Your Online Marketing Strategy: SEO or Content Marketing?“. My response, of course, was that this isn’t an either/or conversation any more. We went back and forth, and Lee agrees.

I bring this up because … well, for a bunch of reasons.

First, like all of us I like when smart people agree with me, and Lee Odden is a smart person. Second, we contend with the same issues that our clients do, and this piece is content to market with, and it’s optimized to handle that part of things; publish or perish, as they said in the old days.

And then there’s this:

As the rules change, a lot of the pieces I’ve been sharing here for the last few years start to look more and more like they really do all come together to a simple point that’s … still pretty complicated and convoluted. In fact, they’re becoming more so. I’ve said for years that computer consultants are really business consultants and marketing consultants are really business consultants, and you’ll create problems for yourself if you hire people with computer, marketing, media, or pretty much any other expertise if they don’t understand that. But getting that point to the place where it makes sense requires a simple approach, and while we do a lot of good in our “virtual COO” role, we decided that both Answer Guy Central and our client base would be better served if we emphasized a new way to talk about a single part of what we do.

That’s the thought behind Influency. A lot goes into getting found and being thought of highly enough to win business and generate word of mouth, and you need to do all of it.

All of it. Not SEO. Not ‘Content Marketing’. Not Paid Advertising. All those things, and more. Yes we handle them all, Yes, I want to you hire us. Duh.

I realize, of course, that by speaking so effusively about the work of a potential competitor like Lee Odden I risk sending you to him. That’s OK, that’s how coopetition works. Lee published my comment at his blog and engaged with me on the matter publicly; same idea. And that’s what this post is really about.

By the way: Anyone remember this story? Lee Odden’s Comment Policy strikes me as exactly right. Lee, I may just borrow that from you, OK?

As the Internet, Search, Marketing, and all of the other subjects that go into Influency evolve it’s coalescence that matters more and more. Don’t like F-Bombs? Me neither, but consider the context. And if you still think NOFOLLOW is a good idea, well, you aren’t paying attention.

Optimize. Please. But understand that optimization isn’t about tricks any more, it’s about having something to say and saying it in exactly the right way. That’s Content Marketing. And that’s Influency.