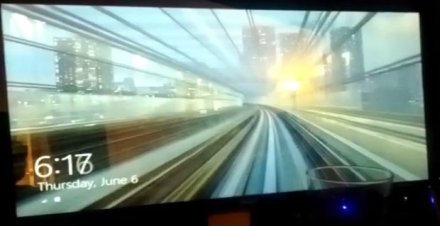 This picture you see above may not seem to say much, but as with many aspects of Influency, there’s a lot happening. Take another look. It’s a Windows 8 lock screen. There are reflections from objects in the room. It’s shot from a crooked angle. You can see the top of a (transparent) glass, with an LED status light glowing through it. And yet, the picture, shot with my Galaxy Nexus SmartPhone, is surprisingly clear. Where are those squiggly lines that usually show up when you try to take a picture of a video screen? Wait, there they are; this image was pulled from a video I shot with the Vine App and this frame was shot just as the clock turned over. In this video, Vine has truly stopped time.

Which isn’t what I was aiming for, but I’ll take it; Vine represents a new form of Influency, and while I’m conflicted about the way it works technically, it’s a game changer. Let’s talk about why.

Vine, after several months as an iPhone-only app for shooting and sharing videos of no more than six seconds, finally made it to Android this week. Our lead designer was chomping at the bit for Vine, so as soon as it became available I let her know and the fun began. For her, that meant “let’s start using this cool new thing right now”. For me, it meant “let’s make sure Vine, now more useful by virtue of its availability on Android, is controllable enough to make it a choice we can implement for our clients without breaking other aspects of Influency”.

Her position is more fun, and way easier to explain. Vine is cool. But Instagram was cool. Pinterest was cool. Even Facebook was cool, once upon a time. When toys stop being fun, what’s their use? I waded in.

Vine only works from your SmartPhone. In fact, Vine is SO unfriendly to web browsing that their web site is nothing more than links to download their App. And when you do shoot a video and post to Vine there’s no way find the video anywhere other via the Vine App. Seriously, your six seconds of narcissism will just be gone, forever, once it ages off your followers’ feeds.

There’s a way around that, and it’s not difficult: post your Vine videos to Twitter, and get the link to those videos from your Twitter profile. Of course, that isn’t really so simple either. And what if you want to embed your Vine videos in a web site, like you see here? Vine provides no explanation of that process either, anywhere.

We’re showing my Vine stop-action ‘masterpiece’ twice to illustrate two different approaches to embedding Vine videos. One has Vine branding in your face, and the other gives no clue to its origin until you click it. And they perform in ways that are almost opposites.

OK, so sharing Vine videos through any means other than Vine itself is too hard, but can be done. That’s fine; it’s why you hire The Answer Guy; we fix your Influency problems. But that still leaves the quality issue; How do you create videos using you SmartPhone, no longer than six seconds in length, good enough to use for business marketing purposes?

The words “stop action” are what matters here, and there are lots of great examples of that on Vine—again, if you can find them. But hey: how about if you figure out the Vine video format, create a compliant six-second video using other tools, and then force that into Vine?

And why would you even want to do that? Because Vine is a Twitter compliment. Vine, ‘used correctly’, is the best marketing tool that’s come along in just about forever.

But with the exception of the kid who reverse-engineered Vine and managed to cram a full RickRoll into it (illegal, and immediately noticed by Twitter, by the way), there’s just no way to use Vine with the level of control that Influency usually requires.

Back to our designer. Her response was “so?”, and she’s right. Now she also got excited about Instagram, and I still say that was a billion dollars poorly spent by the folks at Facebook, but Vine is different. Vine is a way to push your message to the world through video, using the huge, pre-formed Twitter community. And six seconds at a time. Look Ma: Vine is the perfect exploitation of attention issues!

By the way: although Twitter/Vine’s desire to keep you on their web sites is understandable, their insistence that you send movies to Vine only via a SmartPhone App makes no sense. Watch for that to change in the coming months. Regardless, our advice about Vine, unlike many social-networks-come-lately, is simple:  Just use it.