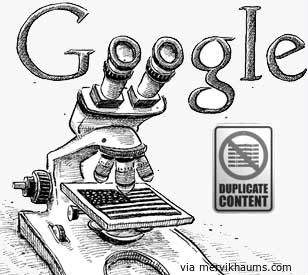 Dealing with Google is difficult. Get past the whole ‘judge, jury, and executioner’ position Google occupies and you’re still left with the ultimate reality: Google is everywhere, and you probably don’t trust them. Considering they now process fully twenty-five percent of all web traffic here in the USA (way up from what seemed like an already-huge seven percent not very long ago), that’s an uncomfortable situation.

Yesterday, Google Search Overlord Matt Cutts reiterated something he’s said before: Google Won’t Penalize you for duplicate content on your web site. And over at Barry Schwartz’ SERoundtable, SEO types voiced their opinion: we don’t believe you, Matt.

Which underscored a couple of things I’ve said here recently: I’m not sure Barry Schwartz is a reliable source for useful information (any longer), and while Search Engine Optimization is critically important to your business, there’s a reason we don’t sell standalone SEO Services any more.

Is Matt Cutts lying? I can’t believe so: Google is so powerful there’s really no need for it to perpetrate such a blatant and ultimately unimportant misdirect on search optimizers. More likely, what Cutts said in the past is true: there’s simply no direct penalty for duplicate content; Google trusts its search algorithm to ascertain the best and/or first instance of a piece of content.

And besides: underneath any arguments you wish to make from any perspective, the reality of the situation is that unless Google penalizes your work manually, even Google can’t quite figure out how SEO ‘works’; there are just too many variables for ‘an’ answer to mean anything.

Or to put it in a way that returns us to the Influency* conversation, everything matters.

Just before we launched the Influency iteration of Answer Guy Central I told you a story about Apple, iCloud, and your continued exposure to upsell if you’re an iCloud customer. And as cynical as the point I made that day may have seemed, from Apple’s side of things the story is about keeping your hand in so many things that you’re simply … always … there. I’ve said before that Apple’s about as Influence-y as a company can get, and they remain so. But with the Google’s and Apple’s of the world the issue is never about one small thing. It’s about controlling everything.

Controlling everything is what we do here. Want to talk?