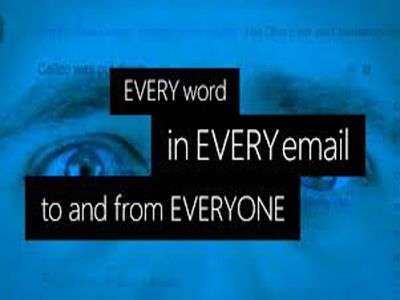 I was actually writing about a lasgna I was afraid of burning that my husband said was sensation-al.

Those words were uttered in a promotional video for Microsoft Office 365, where Microsoft made fun of the way Google handles your data. The irony, of course, is that Microsoft is snooping at your things too. But who says what, about whom, and in what context is immaterial compared to the real point: There is no privacy on the Internet.

I promised this discussion during my little rant yesterday on The Worst CEO in The World. Google has said that when you send an e-mail (specifically, or perhaps implicitly, depending on your perspective when you use GMail), you have no reasonable expectation of privacy. And once again, we have a conflict: I just used the words specific and implicit together, as though they meant the same thing. They don’t, unless they do. Perception is reality.

So let’s be as clear as we can: legal and marketing rhetoric notwithstanding, in their chase for greater Influency Google is ‘looking at your email’ and everything else you let pass through their grubby little hands. So’s Facebook. And Twitter. And pretty much everyone.

The sky, however, is not falling.

I’m not telling you not to worry about protecting your privacy. What I’m saying is that if you have something that you want to remain private you need to first take appropriate steps to protect that privacy and second have some understanding of the potential consequences of your actions. We’ve entered an era where stuff is just … connected. Everything is intertwined and everything is linked. There’s information out there that you forgot about.

Google, despite frequent forays into monopolistic tactics that make this statement questionable, isn’t going out of their way to be evil. Sure, they’re using all of the tools they have to deliver more and more services so that they can make more and more money, but it’s almost certain that they really don’t ever look at ‘your’ information and to date, nobody has proven that when they sell your information to others they sell it in a way that lets those they sell it to identify you.

What about you? Is your business doing the best it can to use the information at its disposal? That’s where real Influency comes from, you know. Want help?