Google Now, Influency, Piracy and the End of Privacy 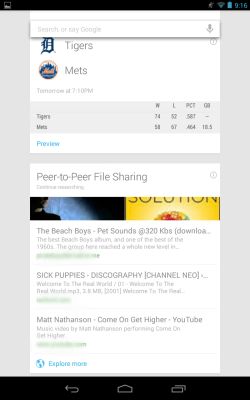 Google Now is getting smarter. That isn’t a bad thing, of course; Google’s better-than-Siri search helper can be incredibly useful, and while I find its insistence on giving me directions to every place I so much as ask a question about to be a bit much, I’ve mostly found Google Now to be pretty cool.

And then today, Google Now accused me of being a music pirate.

Aside from that being incorrect, it raises some scary privacy questions.

Let’s start with the fact that peer-to-peer file sharing is an incredibly useful technology and that even though it’s used extensively by people who might be sharing copyrighted materials illegally, peer-to-peer software like BitTorrent is valuable for more than just piracy. Just ask best-selling author Tim Ferriss. Regardless, my search history being presumed to be associated with file sharing activity and Google having a record of that which might be subpoenaed at any moment is unsettling.

This isn’t the first time Google Now has known something about me that I didn’t expect it to, but it is the first time it gleaned that information via inference. And it underscores what I’ve said here about a simple blog comment having the potential to be a source of Influency, everything mattering, and of course in the most general sense it highlights the question of when it’s OK to trust Google.

It’s probably not a coincidence that Google just yesterday released a handful of new Google Now ‘Cards’, including one that can be used to track your employees’ whereabouts.

All of this speaks to what’s becoming more and more of a necessity: you need to take steps to control your information—and to gather information from others. And that’s Influency. And failing to be in control of your Influency is becoming even more of a privacy issue than employers demanding your social networking passwords, because once you put your information out there, it’s out there.

Ready to have a serious chat about controlling Influency ?