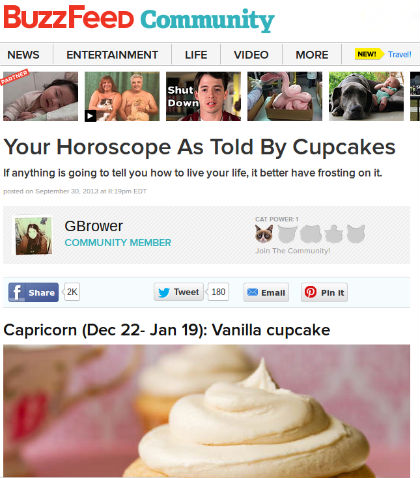 If ever a web site was built to hoard Influency, it’s Buzzfeed. Think of Buzzfeed as The Huffington Post, but with no attempt even made at journalism. It’s awful.

A couple of days ago, a young lady I’m close to wrote a story at Buzzfeed that combines a lot of the elements that get people juiced. Cupcakes! Horoscopes! Pretty Colors! What more could you want? And when the editors at Buzzfeed picked up Your Horoscope As Told By Cupcakes yesterday morning, the traffic started piling up. How much traffic? How’s 75,000 views, 2,000 Facebook shares, and 5,000 Facebook likes strike you?

You’ll note that I’ve ignored the 180 Twitter re-tweets. More on that element of Influency in a moment.

I tell you this story today because I’m very proud of GBrower, and wanted to help feed her hunger for more traffic now that she’s become numbers-crazed seeing what a well-written, well-placed piece of media can do for Influency. Take a look at Doughs and Bows if you want to see just a bit more of her work.

But I also want to talk about change, and thinking differently. You probably guessed right at the start of this piece that I’m not especially fond of Buzzfeed, but Buzzfeed sure does feed buzz among a huge portion of the population. And just as there are many people who will read an article about cupcakes and horoscopes if they find it on Buzzfeed, there are many folks who will read about … everything. Buzzfeed is Influency.

How do I account for the vast difference in activity on Facebook for GBrower’s cupcakes and horoscope story as compared to Twitter? That difference is a part of Influency, too; Twitter may be large and growing much faster than Facebook, but it also serves a different demographic. And to build Influency effectively you need to know what group you’re trying to be influence-y with.

Today GBrower learned a thing or two about the effects of Long Tail Marketing while you sleep. And she’s no Louis CK just yet, but she’s catching up to Neil Young and Elvis Costello.

Here’s an idea: Let’s talk about Influency and what it can do for your business. If you get lucky, I might even bring GBrower in on the meeting.