Guest Blogging? All The Rage. And Then Matt Cutts Said … 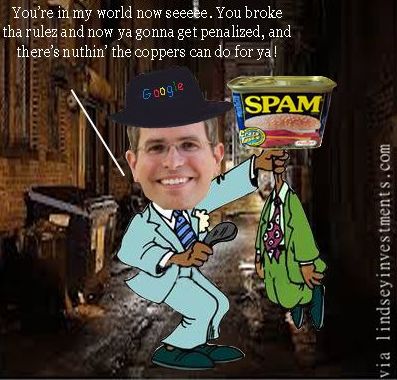 While this picture might be ridiculous (sorry, Matt … ) the idea it represents is anything but: (especially) if you’re a small business, Google is doing some really scary things.

I’ve commented several times that Guest Blogging is increasingly a bad idea for the person doing the blogging. I’ve called out people who rely on guest blogging as a growth vehicle for their web sites but approach the real issues disingenuously. And in discussing Search Engine Optimization as well as broader forms of optimization, Matt Cutts has come up here dozens of times. This week Google’s SPAM and SEO God said something that should have pretty much any small business operator shaking in his boots.

Google is taking an increasingly dim view of Guest Blogging, and it looks like both the blogger and the site where the blogging takes place need to watch their backs.

In fairness to Google, Matt Cutts published his treatise on guest blogging on his own web site; Cutts’ opinion might be a matter of modeling behavior without showing any real intent on Google’s part. But it’s worth paying attention to, nevertheless. As The Internet gets larger and establishing Influency becomes more and more difficult for all but the largest companies, the ways you go about making yourself influence-y will take greater and greater care.

And let’s remember; odd as it sounds, even Google doesn’t really know what works in Search Engine Optimization, and the formula for optimization success is only becoming harder to manage. So yes, if you’re handling your own Influency and Optimization Matt Cutts is a great source of information. But there’s a reason that sometimes even Matt Cutts can only guess as to what works.

So, a few important things to keep in mind:

I group those points as a conversational jumping-off point on Matt Cutts’ words about guest blogging, and remember, I think guest blogging is mostly a bad idea. Achieving Influency, while partially a formulaic pursuit, is mostly a matter of diligence, thoroughness, and casting as wide a net as you can afford; you should no more take Cutts’ words on guest blogging literally than you would go literal if he said the sky is falling.

Neil Patel, a guy who does an amazing job walking the line between spewing SPAM and saying things that really make sense, weighed in on Matt Cutts and Guest Blogging, with a similar perspective as mine: If you are looking to increase your search engine rankings for head terms through guest posts, you are wasting your time. It may work for now, but eventually it won’t. And Patel’s words apply to all forms of optimization.

Want to talk Optimization, Blogging, and all the other things that contribute to your Influency? Contact Me Here.