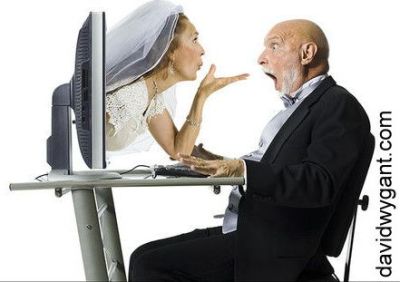 Back in the day, I did my share of online dating. I did your share, too, and enough for all of your friends.

Since I don’t know how many friends you have, that’s a bold statement. But I’m pretty confident I’m right, and since in this context “back in the day” means 1999 I was pretty far ahead of the curve on the whole online dating thing. And while I was quite mindful about a lot of the societal things that were going on (ask me about the woman who showed up at the Chili’s in Paramus NJ wearing what was essentially a lime green terry-cloth bikini), I didn’t give much thought to the business change, marketing, and economics issues.

Recently, I came across an article by James Altucher that rolled all of this together (except the bikini thing). Mr. Altucher is a guy who I find absolutely fascinating. He’s done a lot of things and despite his tongue-in-cheek characterization of himself as a failure, is anything but. He’s a genuinely interesting writer who lately is showing just how important social media and optimization are by virtue of posting his writing in many places, including Medium, Twitter’s long-form low-distraction blogging platform. James Altucher’s Ultimate Cheat Sheet to Online Dating should be required reading for anyone trying to get a handle on Influency* .

I have issues with Medium, mostly concerned with your loss of control if you rely on Medium or any platform you don’t own. But with that said, using Medium as one more way of getting your messages out is an Influency win, and James Altucher is dropping his word bombs in many places so I’m sure that Medium and Twitter’s ultimate control over what shows up there is no threat to him. And to be fair, reading at Medium is … pleasant.

Note that being ugly isn’t in there.

While it adds to the fun of the read, The Nigerian Scheme part is really just an extension of the Opportunity Cost section. So let’s limit this to Opportunity Cost, Supply and Demand, and Trust, which yes, are all both dating and business topics.

Supply and Demand comes down to something pretty simple: things that are hard to come by cost more. Imagine you’re a trailblazing young man at a college that’s just gone from being all women to coeducational (go ahead; imagine it). You’ll be working some pretty great odds there, buck. My sister found herself in great demand when she moved to the west coat in the mid 80s; as a brunette she stood out in a sea of blondes. This is why the Internet has actually made succeeding in business more difficult rather than less; sure you can reach anyone, anywhere. But so can everyone else. Demand for whatever you sell hasn’t budged, but supply has gone crazy.

Leaving us at trust. And Influency is all about trust. I don’t trust this guy. He may be completely trustworthy, but in the Internet world he seems not to be. Trust is about authenticity. Dating works that way, too; if you seem real, you can move on to a date where dinner is a better idea.

All of which rolls back on a very simple idea: KNOW who you are, SAY who you are and BE who you say. And do it quickly.

I’m a dull, intense—now there’s quite a mix, huh?— business and media consultant. Want to spend a few minutes of opportunity cost seeing what that means?