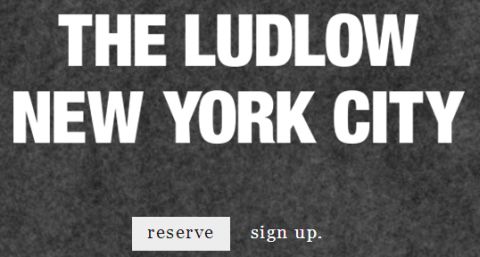 And do I have a great customer service story for you.

Last week, the better half and I had occasion to stay at Ludlow Hotel (note, not the Ludlow Hotel, probably because The Ludlow, an apartment building, is directly next door to Ludlow Hotel on Ludlow Street).

Ludlow Street is on Manhattan’s too-hip-for words Lower East Side. It’s an odd neighborhood; The Lower East Side was a place that back in the days of yore my people worked very hard to escape but now is the place to be, with prices and often attitudes to match. So when you see Ludlow Hotel’s location and its style of accommodations (really nice, really small), you might think ’boutique hotel, boutique prices; of course that’s what’s opening on Ludlow Street’. And you’d be right; Ludlow Hotel, while not in the category of, for example, The Peninsula, is not a low-rent kind of place.

You’d think that would be obvious, right? Ludlow Hotel is an expensive boutique hotel in New York City, and part of a series of expensive hotels in New York and elsewhere from hotelier Sean MacPherson. But while the hotel business seems like the kind of place where amazing customer service would be second nature, it’s not necessarily so and there were some customer service problems at Ludlow Hotel until I dealt with its general manager Bruno Vergeynst, himself a guy with an impressive hotel background.

Which is the bad part of this story about great customer service; Bruno’s treated me very well, but I should never have had to reach out to him at all.

Our experience at Ludlow Hotel started inauspiciously, when we booked a room at their web site. We received no industry-standard instant email confirmation of the reservation, nor was there even a success acknowledgment at Ludlow Hotel’s web site, so we called to confirm. I spoke with a young man who was polite and friendly and assured me that the reservation had gone through.

The next evening we arrived at Ludlow Hotel, and after about fifteen minutes of confusion found that the folks at Ludlow’s front desk had us in the system for the wrong date. It wasn’t a problem as Ludlow Hotel is undertaking a soft launch and is far from fully booked right now, and Mr. Vergeynst showed me that his records actually had the correct reservation!

There were a few minor problems in our room, like the lack of a price list at the minibar and a few things that hadn’t been cleaned properly after they were installed—I presume we were the first people to stay in this particular room. But there was also a larger problem; taking a bath in our room at Ludlow Hotel last week would have required being OK with brown water. I visited the front desk, spoke with the same young man I’d met on the phone when the reservation kerflooey had begun, and he told me two things: Ludlow Hotel had bottled water for me if I needed it, and the entire Lower East Side was experiencing a problem with brown water.

It gets especially uncomfortable here because I wasn’t looking for bottled water—we were trying to run a bath—and we happen to rent an apartment directly across the street from Ludlow Hotel, so we knew that the statement about brown water simply wasn’t true.

Let’s take a detour. This is a story about great customer service, but to get to what was great at Ludlow Hotel we we going through quite a few things that were un-great. So let me point out something I’ve said before: if you can make something good, being negative can be a great thing. And I made this point to Bruno Vergeynst; I could see that Ludlow Hotel is striving to be a great hotel and I wanted him to understand the constructive nature of the criticisms I was bringing to him when we spoke the next day. And whereas the folks at Virgin America were anything but nice, everyone at both Ludlow Hotel and their sister property The Bowery Hotel were lovely at every step of things.

Bruno Vergeynst both comped our entire stay and invited us to return as his guest. And I hadn’t asked.

I like free stuff, and free stuff times two is … well, twice as good. And I’m looking forward to taking Bruno up on his offer. But as someone who gets paid to manage others’ customer service and business process issues the real story for me is that Ludlow Hotel, still finding its way through the customer service maze, is being run in a way that actually strives for improvement and understands that the single most important part of customer service is showing your clients that you care. Bruno Vergeynst gets it.

Do you get it?