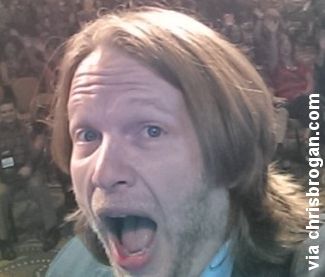 When Chris Brogan Goes Negative It Looks Like This

When Chris Brogan goes negative, it looks like this. We should all be so lucky.

Other than being mystified by his success, I have no issues with Chris Brogan. Directly or otherwise he’s been the subject of several dozen stories here over the years, and despite what I said here, Chris Brogan is a pretty smart guy.

Let me be clear about something: I find Chris Brogan fascinating, both at multiple case-study levels and as a human being. He’s a nice guy. He has a lot of energy. So although this piece talks and may seem to be about negativity, it’s really about business process and content marketing, and about business change.

I first became familiar with Chris Brogan’s work in 2009 when he and sometimes-writing-partner Julien Smith were riding the wave of their New York Times best-selling book, Trust Agents. It’s a well-regarded book, and while you won’t really learn anything mind-blowing from it, Trust Agents was kind of ahead of its time in espousing that you jump full-force into building your social network. Trust Agents was also a bit too touchy-feely, except it wasn’t. Study after study has shown that being positive matters. Chris Brogan, Julien Smith, Gary Vaynerchuk and others have proven to be Norman Vincent Peale, several decades later. It’s all about positive energy, baby!

Problem is, the world doesn’t really work that way. Yes, you need to be positive whenever you can, but there’s a place in the world for negative opinion, thank you very much. I learned the art of The %##! Sandwich some years back; put the bad filling in between good slices of bread, and voila! you have a negative message delivered in a positive way.

It’s always felt to me as though Chris Brogan couldn’t bear to serve the stinky cheese.

Until today. Chris just published something that tells me he has a problem on his hands. Or several. At the very least I’m hearing “crisis of conscience”. Oh, and by the way, you probably have the same problems on your hands as when Chris Brogan Goes Negative.

What Chris Brogan has done in that article is what I’ve been telling you to do for as long as I’ve been writing here—honestly for as long as I can remember. I went here as recently as last week in this post about the need for clear messages in content marketing; ever tried to correct a problem without mentioning what that problem is? Good luck.

But as anyone who’s parented in the last few decades has been taught and will tell you, it’s the way you deliver a negative message that matters; when there’s a problem you don’t blame the child … you blame the behavior.

So let’s repeat a few points about handcuffed negativity—and yes, about content marketing:

The bottom-line point is that we’re all trying to get attention, and unless you’ve built a tribe as big as Chris Brogan has you don’t have the option of just churning out happy-talk pap. And it turns out, neither does Chris Brogan. I sure do wonder what happened to Chris’ short-lived foray into video, though.

Wanna fight about it?