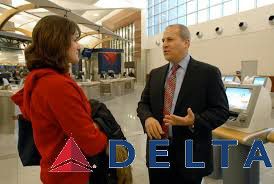 Customer Service is one of those things that lies right in between incredibly easy and near-impossible. Often, Airline Customer Service in particular seems like a complete oxymoron. But in a world of a gazillion transactions and ever-decreasing personalization, maybe that’s just the way airline customer service needs to be.

And, no, I don’t really believe that.

Last week’s trip to Birmingham, Alabama started off on unsteady footing. My flight was delayed a couple of times, which of course is common. I received notice first of a 68-minute delay, then a delay of an additional 9 minutes, approximately five hours and then three hours before my flight was due to depart. I called Delta Airlines and asked directly: is there any chance my flight will be undelayed? I was told, just as directly, that there was no chance of that happening.

I left for the airport well over two hours ahead of my twice-delayed departure time for a thirty-minute trip by cab. Halfway there the good folks at Delta Airlines texted to tell me—you guessed it—the flight had in fact been undelayed.

Insanity ensued. I’ll spare you most of the details; I got rude and pushy at the airport and made the flight with seconds to spare. I authorized that my baggage be sent separately. Thankfully I checked upon arrival; somehow my bag had made the flight with me despite being told very directly that it would not. Three hours of unneeded stress notwithstanding, all’s well that ends well.

Click the link you see at the beginning of this piece about the oxymoron that is airline customer service and you’ll see a far more detailed story on the issue; airlines don’t much care about customer service and as a flier that’s simply an issue you need to contend with. I’ll stop short of saying that’s OK, but it’s fact; ‘flier beware’ is a mantra you need to take on if you ever use the services of a commercial airline.

We should assume that the Delta Airline representative I spoke with was uninformed rather than something worse. But we should also start right there and ask: how is that possible? Are airline customer service representatives less well-informed about the very thing they do than the general public?

Embarrassed as I am that I took the Delta representative’s word for her employer’s policy at face value rather than do the research I’ve done now, this is of course not OK. And the part of this story that includes checking a bag I hadn’t planned to is insignificant, as is the immense amount of money Delta makes from checked-bag fees. What matters is that customer service is easy when you do it the right way, and that in a world where a clear, direct, and important question gets answered so incorrectly Delta airline customer service is, simply, broken.

So what’s broken in your customer service processes?

We’ll help you figure that out, but as I tell clients frequently there are lots of things you can tweak in your business process without help, if only you try. At its core Customer Service in particular is pretty simple; if you look at customer service as an important element of growing your business intent is almost all that matters. Once you see customer service as a profit center it collapses.

Of course, that’s the problem with airline customer service. Virgin, Delta, and all big airlines slipped to the dark side of the customer service equation a long time ago, and large businesses have very little incentive to change their ways until given a reason. And while there are several stories about low-fare, high-touch airlines like PeopleExpress to look back on, PeopleExpress went away when it was acquired by Continental almost three decades ago.

Now ask yourself: do you want to start a new airline? The answer is almost certainly “no”; it’s expensive, difficult, and always ends the same way. But wouldn’t it be great if one component of airline customer service was adequate training?