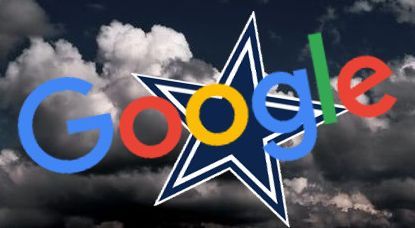 I’m a big fan of thinking differently. It sometimes lands me in trouble but is also where most of our business here comes from. And while there are similarities, I’m not talking about an Apple-style “think different”. At least, not usually. Let’s look at Google Cloud Editorial.

Nevertheless, Google Cloud Editorial  is here—or is about to be. And it’s being headed up by an editor poached from The New York Times.

Google isn’t saying what it means yet, but I’m sure we’ll see soon enough. And I’m sure it will having something to do with keeping you in the Gooogle stable. The question will be whether that makes Google any less trustworthy.

Stop laughing. I know that the idea of Google’s trustworthiness is already pretty funny, but there’s some sorting out to be done. And yes, burying the Dallas Cowboys’ logo behind Google’s has everything to do with thinking differently.

Let’s stipulate a couple of things. First, Google is a monopoly—or at least acts like one way too often. Second, Google’s position in the advertising and search fields creates conflicts that make believing them difficult. Lots of interesting stuff flows from that, like the idea of understanding Google Forced Standards. Nevertheless, while I enjoy discussing the academic, we create business change by dealing in the practical. So let’s get back to The Dallas Cowboys.

Back in the day, The Dallas Cowboys were known to think different by rarely drafting players for the positions they wished to fill. It didn’t matter if you played quarterback in college and they needed one; the Cowboys drafted the best athlete available when it was their turn to pick. They figured out how to use those draftees after they’d sewn them up.

Of course, it’s not really that simple. While all NFL-caliber players are great athletes—yes, even those huge interior linemen—they aren’t and can’t all be shaped the same. So the reality is that you start by making a rule, and then figure out when to break it.

Let’s get back to Google Cloud Editorial.

Quentin Hardy will be the first leader of Google Cloud Editorial. For now we can assume that means his work will impact both GSuite and The Google Cloud (Hosting) Platform. In the real world, that likely means Google is going to roll out a tool similar to Medium. Medium is failing, and it’s owned by Twitter—which viewed according to many business metrics is failing, as well. But the idea of getting people to use your tools more and more and more is sound. Mr. Hardy’s in for some fun.

The Reality of Google Cloud Editorial

Likely so. Google has the resources to create an editorial team, but they don’t need to. Staying with the “think different” theme, living in a world where journalism has become about clicks as much as the quality of content, and realizing that Google already owns the important elements of Search Engine Optimization, there’s no need for ‘Google Cloud Editorial’. It’s a “QUICK, LOOK OVER HERE!” play.

Just as we’re not talking about the Google/Monopoly issue today, let’s not judge the idea of journalism having shifted to something not-at-all-journalism-like. It is what it is.

The real subject today has nothing to do with Google’s trustworthiness, the Dallas Cowboys, or anything else outside your control. The issue that Google Cloud Editorial needs to bring up for you is what tools you use, and why.

BING! (no, not Bing … that was a bell ringing). You need to keep an eye on these tools (or let us do it for you), and understand the bigger picture.

You might even consider drafting a 300-pound interior lineman.