Is There a Google Monopoly in Europe? 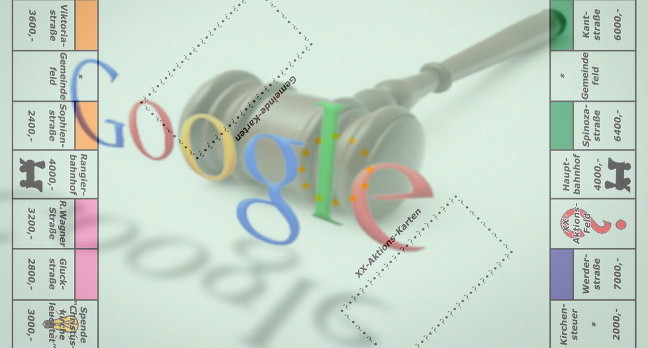 Is there a Google Monopoly? In Europe? Today?

If that three-question question seems awkward and clumsy it’s because … it is. And that’s the point. The European Union has handed down an almost unbelievably large fine because of what it sees as anti-trust violations by the search behemoth, and if you think you have any idea whether there’s a Google Monopoly related to this you’re a better lawyer than I. Of course, I’m not a lawyer.

Lawyers will be slugging this one out for years and frankly, they won’t ever come up with a real answer to the Google Monopoly question. Time for a short trip in The Answer Guy Central Time Machine.

We’ve been asking the “Is Google a Monopoly?” question for quite a while. And while the definition of monopoly is itself in question, what the European Union is harping on with their years-in-the-making fine is something different; Google is being accused of anti-trust violations, which could be linked to monopolistic practices but also (generally) require some form of outside-your-own-purvey action. Anti-trust is a form of collusion and—thank you, Donald Trump—collusion is only illegal under certain circumstances.

Of course—and again—I’m neither an attorney nor in the European Union. But the decision and fine handed Google yesterday are, simply, ill-conceived. The antitrust filing states that Google showed users results from Google Shopping “irrespective of [their] merits,” depriving rival price comparison sites of traffic. Think about that:

While Google makes most of its money from advertising, it steadfastly denies advertising and search are linked. “Find me some information” has nothing to do with “where can I buy Product X?” unless the question includes a ton of specificity.

If you asked Google “where is the cheapest widget in Paris?” and the answer pointed you at a Google partner instead of and excluding the correct answer, the EU’s fine could make sense. Of course, you’d need to include “right now” and “assuming the information was available”.

There is no Google Monopoly. OK, so maybe there is, but that’s the thing; maybe isn’t how you describe “complete nobody-can-compete unfairness”. Is it creepy that Google no longer needs your data? You bet it is. Does Google doing things that compel you to use more data have the potential to cost you money you weren’t planning to spend? Yes, but it isn’t as though you don’t gain something. Do I and everyone who works with search engine optimization wish we had a handle on Google’s Secret Sauce? Of course. But none of that matters, for two simple reasons:

In other words, the European Union is playing with fire. Google could move all their Europe-based jobs outside of Europe any time, and remember there is no actual Google Monopoly. NBD, as the kids would say.

Wondering how to manage your business on your trip from A to B? Wondering if maybe a little less thought could do you good but not quite sure which thoughts to deprioritize? Let’s talk!