Skeuomorphic, Flat, Whatever: Design is All About Influency 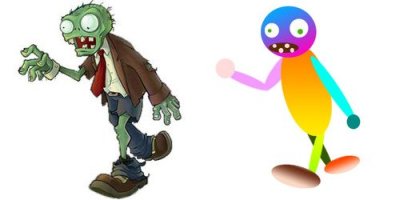 Zombies? Scary. And now that Apple’s lead designer Jon Ive has changed the design of zombies from the “realistic” guy you see on the left to the rainbow character to the right, I think I’m a little more scared. Not of the zombies, but of Jon Ive and flat design.

Flat design isn’t a new idea, and Apple’s not first to this party. Microsoft, for example, has embraced flat design in Windows 8, moving away from skeuomorphism to the simple, less computing-power-intensive, and presumably more universally understood flat design. Fair enough; I like clean lines, too. And let me be clear that Jon Ive didn’t actually draw either of the zombies you see above. But in the next version of iOS, flat design is ruling the day, and the many parody sites popping up since Apple announced and showed their new design vision, like Jon Ive Redesigns Things at Tumblr, illustrate something: a lot of people doesn’t actually much like flat design.

The zombies are key to this.

There’s lots good about flat design. Remove the computer processing thing from this; computers are powerful enough today that eking that last bit of power out of things by reducing graphical overhead is becoming a non-issue except in the field of data transfer. But universal recognizability is valuable. It’s the theory that street signs have been based on for decades, and I’m comfortable with this: everyone knows what a red line through anything almost always means.

But when the ugly quasi-human is reduced to a series of circles, is he still scary—at least, in the same way? Do you recognize that guy as a zombie, or is he more reminiscent of your drawing skills when you were about three years old?

The reason this is an interesting conversation is contextual. Microsoft making things flat didn’t feel like much of a change, and for all its problems, Windows 8 is better looking than all the versions of Windows that came before it. But now Apple is embracing flat design, and doing so aggressively. Is that a good thing? Look at the “settings” icons; hard as I try, I just can’t see anyone believing the flat-design version coming to iOS 7 is better than the skeuomorphoc settings icon that Apple’s been using for years: 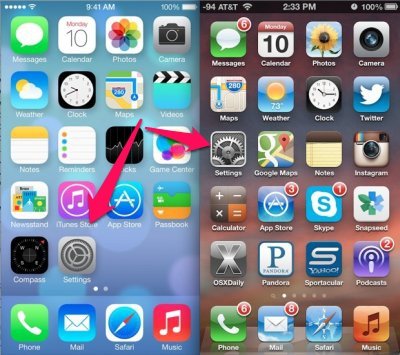 Again, though, we’re talking about Apple. They’ll do whatever they do and the people who love them will adopt. Just how Influency is Apple? I’ve managed to mention them in 157 articles here, and I’m as not-an-Apple-guy as they come. But what about for anyone-who-isn’t-as-Influency-as-Apple? Is flat design the way to go?

I’d like to say that you can mix and match flat and skeuomorphic design, but that’s probably not the best idea. But the beauty of being in charge of these decisions is that they’re yours to make. So tell me: is this a drum kit? 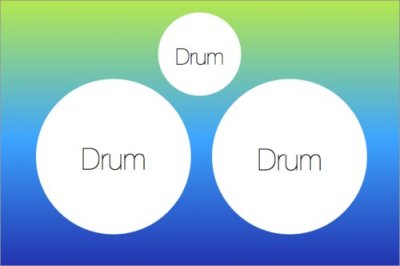 I’m probably the wrong guy to ask; I play guitar.