No Authenticity? No Influency 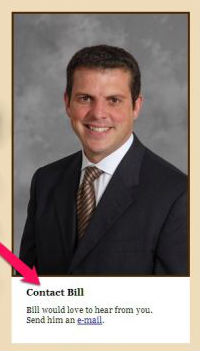 As the lines between all of our responsibilities continue to blur, one thing that’s becoming more and more clear is that people value authenticity. It’s an interesting issue in that people are often mistrustful of claims of authenticity, but underneath almost any other marketing conundrum is the reality that if people think your message is a lie, it might as well be.

The smiling gentleman you see here has an inauthenticity problem. I tried to point it out to him, but I don’t know if he heard me, because the link on his web site offering you a chance to contact him and claiming that he’d love to hear from you doesn’t actually point at him; it points at his executive assistant.

What’s interesting about that, aside from the fact that anyone who tries to contact Bill can’t actually do so, is that the e-mail link pops up a window clearly addressed to someone other than Bill himself. OK, so Bill, who’s the CEO of a company you’ve heard of if you ever watch late-night cable television or still listen to terrestrial radio, is a busy guy. No problem.

But this link doesn’t live on the web site of the company that Bill runs. It lives on a vanity website in Bill’s own name, and hey, Bill? It would have taken an inexperienced programmer just a few minutes to get that e-mail to your secretary via a form instead of an email message, thereby hiding where it was going since … you know … you don’t actually want to receive these e-mails yourself.

Like I said, that’s OK. It’s the lie, and the lack of any effort to mask that lie that are the problem.

I’m not revealing who Bill the CEO is, because I’m actually in the middle of trying to do business with Bill’s company. And under most circumstances even going this far would torpedo my chances of making that business happen. But the business we’re trying to conduct actually goes toward exactly this issue. Bill? If the message ever gets to you, do reach out.

But for the rest of the world there’s just nothing good happening in Bill’s transparent inauthenticity. And for a CEO it’s even worse than when a business author is inauthentic. If I can’t trust you, maybe I can’t trust your company, Bill. And oh yes, Bill’s company is actually in the trust business!

If you trust me enough, I’d love to talk about the way we get your company to the place of Influency you’re looking to be in. And by the way: reach me using this link, and you’ll actually be contacting me.