Comment Engagement: A Good Indicator of Trust and Influency? 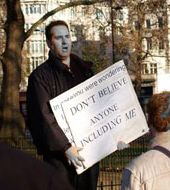 Who do you trust? Have you given any thought to why? I’ll bet it has something to do with engagement. Now, think about this:

This week, Fred Wilson, a successful and, odd as this might seem, popular NYC-based Venture Capitalist, put his community on notice that he might stop replying to—or even reading—comments at his blog. And to be fair, Fred pointed out that his only reason for changing the way he handles AVC.COM is that it’s become so popular that he simply can’t afford the time personal moderation requires. OK, Fred, I get it, and maybe I should stop there and give you a qualified pass on the matter as I did Chris Brogan when he said something similar several years ago.

So here’s the question: should an analysis of the ‘right’ way to do content marketing, social media, and Influency stop there?

The problem with answering that question lies, believe it or not, in a song by Eminem, who in the song Stan described his relationship to and with a less-than-stable fan as of course I want you as a fan, but you shouldn’t expect anything in return.

The truly famous are so inundated by so many people of all stripes that despite how bad that sounds the general idea is … well, it just is. I’m sure that many famous people wish they could connect more genuinely but simply don’t have the time or enough security staff to do so safely. And Fred Wilson and Chris Brogan, as not-quite-famous guys, have a similar problem if on a smaller scale. I actually understand this a little; once upon a time I did a bit of TV and a radio program and every now and then something scary would happen ‘outside’. Put simply, being known or popular carries various kinds of baggage.

What does all of this mean to the rest of us, and Influency?

First, you need to optimize. That optimization might take a lot of different forms, but you must ensure that people can find you. We can help, by the way.

Once you create that critical mass, though, you need to handle your traffic in ways that make people happy they reached out. Always. Every time. Don’t confuse candor for transparency. Understand that alienating people who have taken the time to reach out is pretty much the worst thing you can do. And that while social networking may not be altruism, that doesn’t mean it isn’t sincere.