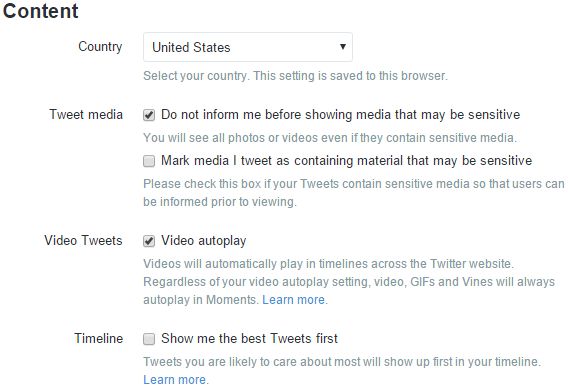 Take a look at the so-dull-it-probably-shouldn’t-even-be-an-image here. It shows the portion of my Twitter account illustrating the content parameters that Twitter will follow—more or less—in deciding what I see, what my followers see, and when and how. Ready for something you should never need to think about, but do? Time for a quick chat on social media content parameters.

Most of the information managed by Twitter’s brand of social media content parameters isn’t that interesting until you think about what the choices actually represent. Where am I (or where’s the information I’m most interested in) and how I feel about either seeing or re-displaying racy content? Pretty obvious stuff. Do I want video-formatted files to play automatically? I don’t know anyone who would leave that one turned on, but that’s the point, isn’t it? auto-played video is universally despised, especially if there’s automatic audio in there.

And then we get to that “Timeline” parameter.

Users often misunderstand social media timelines. With over 1.5 billion people using Facebook every day you wouldn’t think you could still find people who don’t realize that what shows up there is a small subset of the things their friends post, even though the ever-growing volume of advertising interspersed there really ought to push that understanding along. But you’ve been seeing only a portion of your Facebook network’s information since before we published this post six years ago,  and yet somehow I still encounter people who believe that what they see on Facebook is everything their friends publish.

Give that a bit of thought, of course, and you realize it can’t be correct; keeping up with the entire volume of cat videos and food pictures alone just isn’t possible unless your social network is limited to a couple of dozen people. But at Twitter, social media content parameters have always been different; if you scrolled back enough you saw all the tweets that all of the people you follow posted—even if you needed to decipher that information’s place amongst the ever-growing volume of interspersed advertised tweets.

This means, of course, that you very likely see almost none of what the folks you are supposedly interested in following have to say, especially if you follow lots of people. It’s also the reason that we recommend most people not do the follow-everyone-who-follows-you thing, even if it results in a larger follower base for you.

My favorite example of this is “my most influential Twitter Follower”, Barack Obama. Along with six hundred thousand or so others President Obama follows me, and has since pretty much the moment I started using Twitter. But with seventy million followers that number look pretty small, doesn’t it? And yes, of course we know that “President Obama’s” professional account plays in a different league than pretty much anyone and it’s likely the big man has no real interest in what I say, but still: good management of social media content parameters means you need to be selective in who you follow on Twitter.

A couple of weeks ago, Twitter flipped on a curated-content feature that—unless you were paying attention the next time you logged in and opted out—gave Twitter even more control over what you see than it had before. Think back to the point about Facebook users not even realizing that’s been done to them pretty much forever and you might not think it’s terribly important, but if you use Twitter to keep up with information you actually consider important the feature ends you.

Given that Twitter is a tool used worldwide to break actual news, that matters. Remember the social revolution in Egypt a few years back? What if Twitter had been”helpfully curating content” for the folks at news services back then?

Just a few days before they did the old content switcheroo, Twitter CEO Jack Dorsey responded to rumors on the subject by saying it wasn’t true. This turned out to be a lie, of course; not only did Twitter throw the curated social media content parameters switch, but in fact the timeline for the switch to Twitter’s timeline turned out to be exactly when Dorsey said it wasn’t happening. I could have let this one go on the grounds that the switch, opt-out though it was, was optional—until Mr. Dorsey got trapped in his own contextual carefulness.

More than ever, trust has become lingua franca, and social media renders that a bit more true every day. And Jack Dorsey has lost mine, probably forever. I bear no illusions about whether he cares, any more than I believe Bill Gates or Barack Obama really see very much of what I write. But I care very much what you think, and of course the real point is that you need to care what those who follow your words think about you.

No big deal, right? Just keep up on your social media content parameters and you’re golden. Want a hand with that?