Are You In Control of Your Web Site Speed? 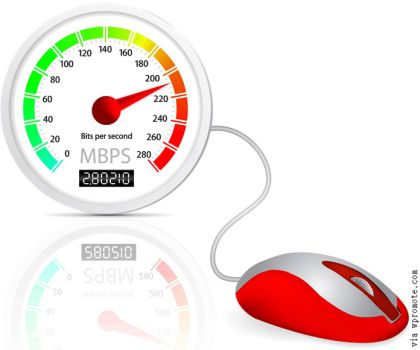 While I enjoy talking about the problems in interpreting statistics—and there are plenty that impact any discussion of web site speed—the only one that ultimately matters is how long your site takes to load, compared to what your visitors expect. For example, Google loads in a flash, both because Google has the money to throw resources at solving that problem and because there’s almost nothing on the google.com home page. And both of those issues are on people’s minds, at least subconsciously, when they visit Google. Sites that are either not Google or that show you the moment you arrive that there’s a bunch of stuff loading and you need to hold on for a few seconds get a momentary pass.

How much of a pass can you take for granted? You can’t; speed matters, and because you’re never sure who’s visiting or what their frame of mind will be when they do, you need always to keep an eye trained on it.

Rereading this post for almost four years ago on the importance of speed got me thinking, and testing. So I ran the speed test at pingdom.com on Answer Guy Central, and I wasn’t pleased; this morning, loading our home page is taking over six seconds. Historically we’ve been more in the two-second area.

There’s a reason, of course. Answer Guy Central is currently using a design that includes over 130 images on the home page and about 35 calls to other web sites. But standing front-and-center in the lag is one piece of content that we added just a couple of days ago. Almost thirty percent of the time it takes to load Answer Guy Central is spent showing a preview of this presentation on Influency at slideshare.net. This leaves me several choices:

I don’t love the first option; it messes with our Content Marketing Strategy. The second is OK, if not optimal. And the third option isn’t really an option at all. Or Is It? For comparison, I also tested the performance of my latest post, as well as the home page of The Huffington Post. Our individual content pages are lighter than our home page, and sure enough the performance was much improved. I chose Huffington Post as an extra data point because its load is similar to our content pages: 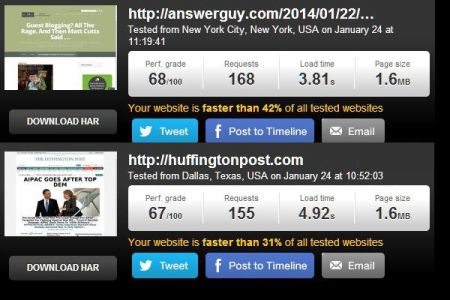 It’s sort of interesting that the page sizes are identical, and our speed is better even though we’re loading more things than HuffPo is pulling together. But again … what about those two-second load times? This is where the question of how you present and manage web pages gets complicated. See this clip of the Answer Guy Central home page loading? Notice that part of it shows up immediately, while other pieces “load in” over a few seconds? For the user, this is acceptable; they see progress happening and so long as page load progress doesn’t get in the user’s way, there’s no problem. But is Google OK with multi-second page loads?

If there’s an official answer, it’s ‘no’. The guidance that Google has provided says that you need to shoot for page load speeds under two seconds. On the other hand, there are so many variables that go into a statement like that, it doesn’t really mean anything; while you want your pages to load as quickly as possible, what ends up mattering to Google is the same thing that matters to people. As long as your page feels fast enough, it is fast enough.

Interestingly, this is the same over-simplified official position Google takes when you ask them about Search Engine Optimization; design for the user, not for Google. And no, it isn’t really that simple, but until you’re serious enough about your optimization and content strategies to hire The Answer Guy, it’s a good jumping-off point.

Now, if you could just figure out Content Marketing …