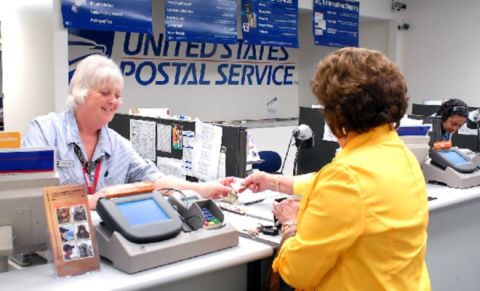 Which might sound obvious too. The USPS has had more than its share of customer service issues for a long time, so the very idea of USPS Customer Service may have already made you laugh. Read on.

To be fair, customer service at very large companies is difficult, and instilling a customer service focus at an entity the size of the USPS and with its we-aren’t-the-government-but-we-act-like-we-are mentality has to be extraordinarily tough. And while the postal service isn’t ever exactly fun to deal with I’ve experienced USPS Customer Service agents who at least tried. Not so today. Perhaps I should have realized things were going to be ugly when I saw this: 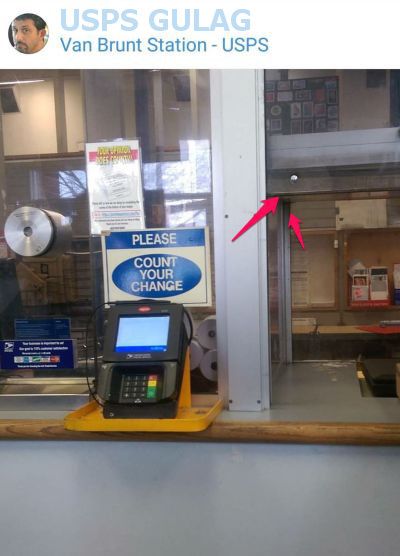 See the two arrows? They point to the bullet-proof glass on each side of the scales that the Van Brunt Station USPS Customer Service agents use to weigh packages. And quite the security system it is; if one window is open the other can’t be. Insert “going postal” joke here; maybe the post office two blocks from my home is in a warzone I wasn’t aware existed, maybe it was once dangerous there and the Van Brunt station is merely awaiting an update.

And the customer service problem wasn’t even about the place feeling like a gulag.

A couple of weeks ago I made a purchase at Amazon.com. The package was directed to an old address, which was completely my fault; I didn’t pay close enough attention. By the time I realized my error it was too late to correct; the package had already shipped. So I contacted the post office in Stanhope NJ and asked for help. USPS Customer Service there was exemplary; the package was re-routed to my new home.

Just hours after the folks at the Stanhope Post Office corrected my error the package had found its way to Teterboro NJ. Then, something went wrong. The next day it departed Teterboro for Brooklyn, where it was scanned in one day afterward. Two days after that it was back in Teterboro, and then it took four more days to find its way to Jersey City: 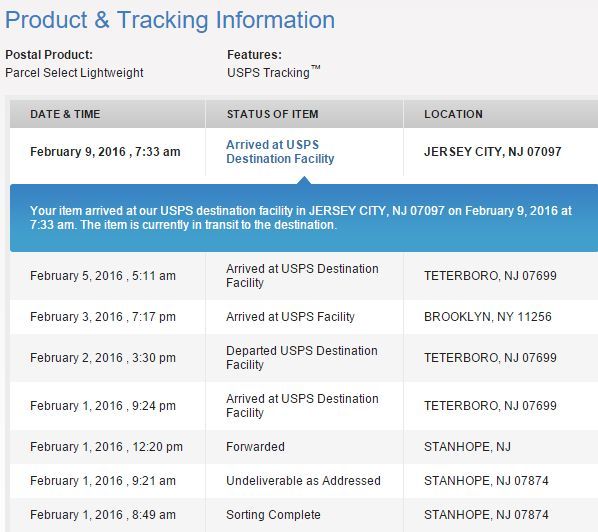 Today I visited the Van Brunt Station to ask for help. The line was long. In fact, the two lines for two I-still-don’t-know-how-they-differed were long. When I got to the front and gave the USPS Customer Service representative my tracking number I was directed to go to one of the USPS self-service machines, print out what turned out to be the exact same information I came in with, and bring it back to the window. After another stint on line I reached a window and was informed that my package was in Jersey City and there was nothing I could do except wait for it to arrive. Of course, I already knew the first part of that, and I was there specifically because I was concerned the second part was never going to happen.

When I pointed out that problem I was directed to ask for further help at another, specific window, and when the agent at that window became available she flat-out refused to help; I was told I needed to speak to an agent at another window still. The agent at that window told me she had heard everything that had happened at both of my prior stops and that she couldn’t help me. To her credit, she called for a supervisor and I’m happy to say I didn’t even need to ask her to do so.

The supervisor took my printed-out package itinerary and my name and address and promised me she would email the office in Jersey City where the package currently sits. She said she hoped that someone there could properly redirect the package. Which means, of course, that after spending the better part of an hour going through several stops and three USPS Customer Service agents I have absolutely no idea whether I’ve actually received any customer service, at all.

And of course, my package remains in limbo. I expect it will get to me eventually, though despite the fact that it was in town six days ago it seems likely that won’t happen before I visit Birmingham Alabama next week. Thank you, United States Postal Service, for the chance to talk about broken customer service in such graphic detail.

You aren’t doing USPS Customer Service, are you? Not sure, or think you need help? Contact us here.