OK, so that hasn’t happened yet. But it should.

Kim Kardashian, one of those famous-for-being-famous celebutantes we just can’t get away from, has a new income stream. Tweeting. And get this: Ms. Kardashian’s rate is $10,000 per.

It shouldn’t surprise you that Kardashian gets paid to tweet, any more than it would if you found out that any message to 2.7 million people (her following as of December 20 2009) was compensated.

Now do the math: a television ad during the Super Bowl goes for about $3.5 million, and reaches about 400 million people. Paying Kim Kardashian $10,000 to put a message in front of her followers, who wish to hear what she has to say, is a bargain. The Super Bowl ad reaches 148 times more people, but cost 350 times as much. And a bunch of the potential viewers walk away from their TVs to get snacks while the ad is running!

Point #2:  a couple of months ago the FTC made it illegal to blog for pay without disclosing that you were being paid. And let’s be clear; both by function and frequently being referred to as a micro-blogging service, posting on Twitter is blogging. So when we see this . . . : 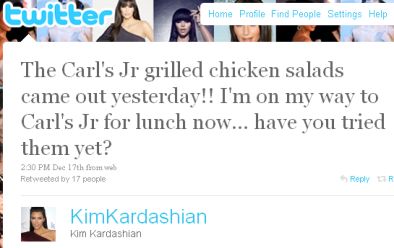 It’s coming, and soon. To be fair, Kardashian claims that when she posted that Tweet she hadn’t yet signed as a spokesperson for Carl’s Jr., so maybe there’s a loophole to wriggle through. For you though, the message, again, is clear: ignore social networking at your own peril.