Valentines Day is in the rear-view mirror. You’ve spent an inflated amount on flowers, a similarly-inflated price on dinner, and moved on. Your life is the same this morning as it was a couple of days ago, except you’re a bit poorer.

And if you’re one of the many Groupon customers who bought that half-off flowers deal from FTD you’re a bit less angry than you had been.

Groupon is a pretty cool web site, where every day a deal that’s so good it’s hard to pass up floats into view. Aside from Groupon’s recent problems as they got accused of breaking consumer laws (they ought to weather that storm, by the way), things are going fantastically well at Groupon; they actually passed up a $6 Billion acquisition by Google recently.

But when Groupon did a deal with FTD for Valentines Day Flowers and FTD pulled a blatant bait-and-switch, Groupon looked every bit as bad as FTD. 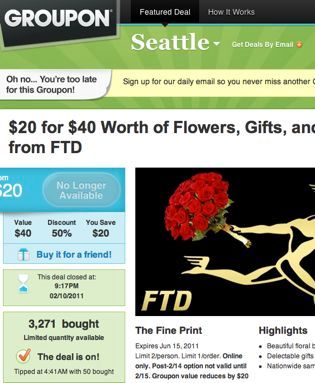 Groupon’s response? They refunded the extra money that FTD charged. No questions asked. Quickly. Done. Period. If doing superb customer service on this deal cost Groupon $32,710 just in the Seattle area, it must have cost . . . well, loads . . . everywhere.

Of course, not everyone can afford to throw an ad-hoc million dollars at problems as Groupon can, but the idea is sound; customer service is about making sure your customers understand that you’re in their corner. REALLY in their corner.