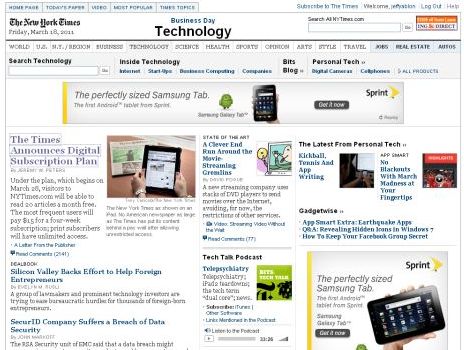 There’s an old saying about how officials at sporting events should be invisible and anonymous; everyone’s better off if they do their jobs and we never know anything about them other than the fact that they must have been there, but … we don’t remember them.

Just yesterday, a story about that concerning referees in the NCAA basketball tournament ran in The New York Times. Enjoy that story, and quickly; this morning’s news is that the New York Times is about to start charging for access to their online edition, and your ability to read it a couple of weeks from now is not a certainty.

We’ve known this was coming for quite a while. The New York Times acknowledged its intentions to start charging for on-line access almost a year ago, and the only questions that remained were when it would happen and how much it would cost.

The good news is that the monthly subscription price of The New York Times Online has been set at $15, less than the $20 previously speculated. The bad news? The way the New York Times is explaining their choices.

The Old Grey Lady has decided that people who don’t pay will continue to get limited access to its special take on news. And if they stick to the promise they made earlier on the matter you should still be able to see articles that are linked to from other web sites. This is simply the right thing to do; many web site operators, including us, would have huge jobs fixing the many broken links that disallowing referred traffic would create.

But because referred links will continue to work, free access to The New York Times On-Line will still be a reality. Take a look at this Twitter account: It’s a day old, already has over two thousand followers, and is dedicated to exactly that idea. It’s similar to the idea behind World Newspapers.

Who does that leave?

I admire The New York Times for defending the idea of their content having value. And in the scheme of things they sure do look like they’ve tried to take as many perceptions of their paywall going up into account as was possible. But this strikes me as the wrong way to do things, anyway. An even lower price, with everyone including print subscribers having to pay for online access to The New York Times, would have made more sense.

Sure does underscore how important managing your business change issues is, huh? But I guess that would have raised uncomfortable questions about The New York Times’ recent elimination of their Social Media Manager position.