The Newest Mac Mini, and The Evil That Is Apple 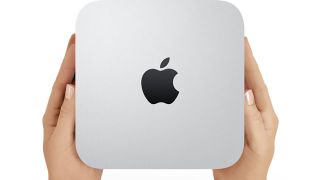 Yesterday, Apple released a bunch of new products. There’s a new version of the Macintosh Operating System that makes your computer act a lot more like an iPad, and also adds other new features. There are new laptop computers, and Apple’s eliminated a few models. In short, yesterday was just another one of Apple’s a-couple-of-times-each-year product drops.

Except for what Apple did to that darned Mac Mini.

The Mac Mini isn’t new; in fact, it’s been around for quite a few years now. When Apple first released the Mac Mini they talked it up as a replacement for your “real” computer, but since that doesn’t work for laptops (no screen), and doesn’t work as a workstation (not powerful enough), the Mac Mini’s role has been relegated to that of a server. Personally, I’ve never seen a Mac Mini used as anything except a media hub.

The newest Mac Mini’s specs are impressive. Most impressive? The new Mac Mini doesn’t have an optical drive. You can’t insert a CD or DVD to install software; new stuff can only be installed on the Mac Mini via download from the Internet or by plugging in a USB drive.

Or is that least impressive?

While Apple’s explanation makes sense (no room if they wanted the other specs to work without making the Mac Mini less mini), I see the removal of an optical drive as one more control-your-actions form of evil from the folks in Cupertino.

I’ve pointed out Apple’s penchant for releasing products that control the way you work, before. The iPad creates a business model for publishers that lets them impose controls on you that just don’t seem right, for example, and the very cool seeming Apple TV is a veritable control monster. By releasing the Mac Mini without an optical drive, Apple is all but guaranteeing that you won’t ever use it with an operating system other than theirs.

This may not seem like a big deal, and other than the benefit of it being so darned cute and little the truth is that almost everyone who picks a Mac Mini as their server device is doing so because they’ve drunk the Apple Kool-Aid—so not being able to easily change operating systems won’t matter much to them.

But given that the Mac Mini is best suited as a server, might it make sense to install a different operating system, such as FreeNAS? Lacking that bootable optical drive, it isn’t going to be easy, so score another win for Apple in their control game. The Mac Mini, previously an easy-to-alter computer, now … isn’t.

I hope I’ve been clear, both in this piece and others I’ve written about Apple in the past, that I admire the company and their uncanny ability to foist self-serving business change on us all and make it feel like they’re doing us a favor. But the new Mac Mini just plain jumps out at me as an example of why you need to be very careful when you decide to do business with Apple.

And that’s a story about managing your business change.