Once more, with gusto: THERE IS NO SUCH THING AS PRIVACY. Say it again: privacy, if there ever was such a thing, is dead. Facebook has killed it.

I’m not just picking on my least favorite social network. This morning, I logged on to Facebook and saw something I’d never seen before:

Yesterday, one of my Facebook friends read an article. At Yahoo! News. About Joe Paterno. And another read an article at the same place about the deals Wal-Mart will be offering on Black Friday.

(Update: On November 10, I saw a similar issue with Facebook and The Washington Post; not surprisingly this disrespect for your data privacy isn’t just a Yahoo! thing.)

Holy Cow. Good thing they weren’t at TMZ reading about Lindsay Lohan, or I’d have altered opinions of them.

Or even more to the point, good thing they weren’t reading about something controversial, or looking at pornography, because Facebook is now broadcasting information about the things you do, right out in public, and I’m going to guess that nobody you know and pretty close to NOBODY has ever made the conscious decision to broadcast that information.

When Facebook started rolling out their Timeline view a couple of months ago, I pointed out that I thought it made the social networking giant a little bit more compelling; everything was no longer just a big mess of incomprehensible facts. But I also told you that Facebook, the Timeline Version Ends Privacy Once and For All, and that groups you had given permission to were going to start posting to your wall and those of your friends about what you were doing. Well, it’s here. Yahoo! is now broadcasting your reading habits to everyone you know.

Is this automatic? Not quite, but close. 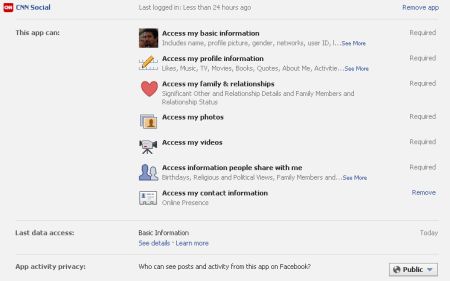 At some point, I authorized CNN to keep track of me, or hook me in with my friends who also read CNN.com, or … something. See that “access my contact information” item in the picture above? When CNN gets around to turning on what Yahoo! has turned on, any time I read something at CNN.com it will tell everyone who visits my Facebook profile or is connected to me and reads their own, exactly what I’ve done.

At a very simple level, I can address this by saying “don’t do anything on the Internet that you’d be embarrassed of”, and walk away. But it isn’t as simple as that.

Sure, you can not look at pornography in fear of the sites you frequent broadcasting your predilection for big-bottomed older blonds to Facebook 😉 . And maybe Facebook is doing the world a favor by scaring all but the most hard-core pornography lovers away from smut. But here’s the thing:

At a more innocent level, let’s say you’re at a web site and either on purpose or otherwise “Like” something, thereby giving that web site permission to say so. Let’s say you were shopping at that web site. Let’s say you bought a gift. When that web site broadcasts your purchase to all of your Facebook friends, there’s a pretty good chance that any surprises you had up your sleeve will be destroyed.

Your only defense against this is visiting Facebook often and checking the permissions you’ve given Applications and Web sites, buried several levels deep in your privacy settings. I had over sixty items with permission to publicly broadcast my actions to Facebook when I checked this morning, and I’ve never heard of half of them.

Truly, Data Privacy is a Mess That Can’t Be Cleaned Up. But Facebook’s newest “feature” takes the problem to too uncomfortable a level. This is not a business change you want to be involved in.