The Politics of Employing Homeless People 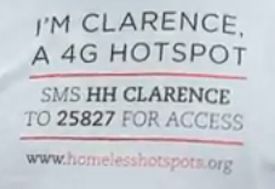 If you know me, you know I don’t do “politically correct”. If you don’t know me, all the proof you need is to read a piece like the one I wrote yesterday, criticizing Gina Trapani and her NarrowTheGapp Project for inventing a social problem that doesn’t really exist.

Here’s an even better one:

At SXSW, the annual tech-weenie gathering in Austin Texas, there are a bunch of people walking around wearing tee-shirts like the one you see above. These folks are carrying wireless 4G Hotspots, making Internet access a lot easier and collecting voluntary fees from people who access the Internet through their devices. The guys in the tee shirts keep all the money they collect.

The project is being paid for by BBH Labs, a marketing company spending a few dollars on a project that helps out people looking for an Internet connection and provides what might be a decent income stream for those wireless HotSpot carriers. Everybody wins.

The people carrying the Hotspots are all homeless, BBH is calling their project a “charitable experiment”,  and the mostly-young attendees at SXSW are still too liberal in their views to see the good.

Let’s try to give some credence to the points that the PC Police are making: BBH could have worded those shirts differently. And in promoting themselves BBH didn’t have to use the word “charitable” in describing their little stunt. But take away the deux faux pas and what’s left? A valuable service providing employment at a reasonable rate of pay to people who otherwise wouldn’t have had the gigs.

When did that become bad?

The activist position being put forth on this is just plain dumb. These guys are being paid to do something useful. It is ABSOLUTELY NO DIFFERENT than paying someone to wear a sandwich board or hand out fliers.

Does it sound creepy because it’s homeless people being “targeted” to make a few dollars? I guess. On the other hand, the homeless of Austin are the demographic who’s there and available to work. I know this next part is a stretch, but they’re even doing this work in an entrepreneurial manner, which with any luck will get a few of them thinking about “what’s next”.

Why is it so hard for so many of us to see the benefit of things that shake up the status quo?

That question was mostly rhetorical; it’s hard because it’s hard. It’s hard because change is scary … business change perhaps the most scary change of all. You want more details and specificity? I see many years of therapy in your future.

And that’s where political correctness leaves me cold. People complaining about jobs being created on grounds like these are having knee jerk reactions and missing the big picture instead of thinking rationally and moving on to something more important.

Politics and correctness leaves us arguing about things like Health Care Reform as though there’s an argument to be made against it. Yeah, I went there. PC behavior forces smart people like Craig Newmark of Craigslist to make sad, scared choices. No, I don’t use hookers. I don’t even use escorts.

Political Correctness even leaves us in a place where a cartoon character is closer to understanding the economy than … almost anyone.

What political correctness doesn’t do is create business change. You got a problem with that?