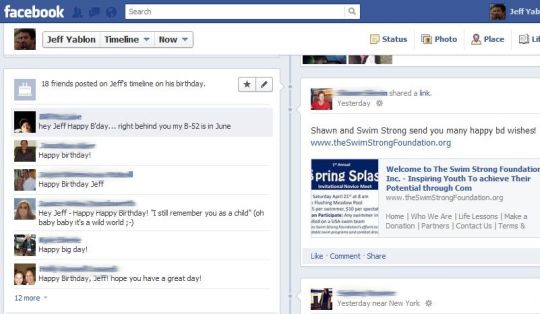 Last week I celebrated my birthday. And Facebook celebrated right along with me; when I started my abbreviated workday on Friday morning I had a handful of Happy Birthday wishes from my social networking friends, and more rolled in while I was replying to those.

It may have re-created loose ties to people I had lost track of years or even decades ago, but Facebook is social networking done the wrong way. I enjoyed seeing those birthday wishes, and was enjoying responding to them. But then Facebook “helpfully” collapsed them, as you can see above. At that point, I lost (or felt as though I had, which is the same thing) the ability to respond. If you’re one of the people who sent me a “Happy Birthday” and you didn’t hear back from me, please accept my apologies. Facebook giveth, and Facebook taketh away.

At its worst, social networking causes isolation and depression. At its best, it’s a pretty cool idea, but so far about the only useful social networking model I’ve seen come along is interest-specific social networking. Doximity, for example, is getting doctors talking to other doctors using their computers. Now there’s real business change!

If you don’t belong to “special groups”, or haven’t figured out how to find members of yours, though, you’re left with the too-big-and-too-general Facebooks of the world. Facelift, our never-quite-got-completed stab at social networking, was conceived as a broad-but-more-controlled alternative to Facebook, and I believe that’s the way broader social networking will have to go to become truly useful.

Yes, I just said that in social networking broad needs to be narrow.

Smart journalists are figuring this out. On the other hand, letting your social networking consist of random clicks is a bad idea.

When all is said and done, and as our reaches get bigger and deeper, the important thing to remember is that in social networking, as in life, biggest and best aren’t synonyms.

Or as this salesman buddy reminded me earlier today, in a social networking world it can feel as though both the network itself and the people you’re connected to through it are trying to scam you. Your job is to create business change that heads that off.