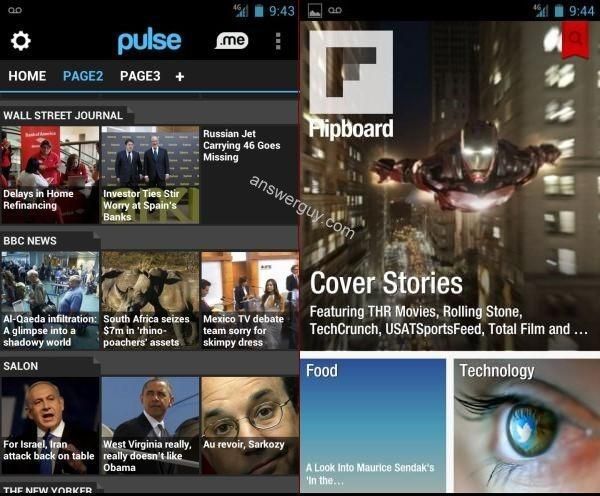 Flipboard is the future of journalism. Here’s how I know that’s true: I’ve just installed the Flipboard App on my Galaxy Nexus SmartPhone, hate it, and I’m still going to be using it.

The journalism wars are over. The bad guys have won. Go Home.

Flipboard, long a staple on iDevices, isn’t even supposed to be available for Android. It’s part of the pre-installed software package on the just-announced Samsung Galaxy S III, and was supposed to be an exclusive on that not-yet-available device for some months. But Flipboard for Android has leaked and is easily available.

In the image at the top of this piece I show you both Pulse, previously the closest thing to Flipboard on Android devices, and Flipboard itself. You may or may not feel that the Flipboard interface is superior to Pulse’s presentation, and you might catch on to the fact that in Pulse you get to select your specific news sources while—unless you dig deeper than most people ever will—Flipboard feels like it’s the sole curator of broad categories you select—and hate that.

But even seeming as though it’s cut you off from choice, Flipboard will  probably make you feel as though its apparent lack of user-configurable options—or perhaps because of that—is just . . . better.

Since the earliest days of the Internet, one of the ideals that’s been espoused over and over is that on the Internet you have choices. You can pick where you get your news, when, on what kind of device, and. . . Flipboard ends that. Use Flipboard, and you’re probably going back to a time when somebody else decided what news was important for you.

Flipboard is the Internet equivalent of the Eleven O’Clock News. Sure, you still get to decide when, where and on what you read your Flipboard-icized content, but whereas Pulse and every other news reader I’ve looked at lets—demands, actually—that you decide where you get content from, Flipboard wants to be your editor.

I’m truly conflicted about this.

Flipboard is ridiculously good. It looks great. It works in a way that just plain makes sense. And once you figure out how to customize Flipboard you’ll find that it’s uncannily adept at showing you what you want to see, in the order you want to see it. But there’s that “It has no options” feel to Flipboard.

And for better or worse, that’s the point.

Does your news reader really need to have “options”? Flipboard isn’t productivity software, like Google Drive. And although I still say I find Flipboard to have an obtuse and unintuitive set-up, once it’s running Flipboard is easy (this is no “computers are too hard” issue). And presumably, Flipboard—at least once you can get a copy legitimately—won’t require you to make upgrade decisions.

No, the issue with Flipboard is that it’s so easy to believe it to be uneditable that for many users selecting Flipboard will amount to giving it de facto control over what news you see.

Which is great news indeed if you’re Flipboard. Business Change? You betcha! Flipboard can become the one and only news outlet you go to.

But that brings us full circle to an issue that I’ve talked about quite a few times. As a huge aggregator, Flipboard can become part of the problem with too-much-to-consume journalism, where opinion passes as fact. And more than likely that change will happen without Flipboard ever intending it!

Half-baked ideas aren’t journalism. If you work for the company you write about, that’s not journalism, either. Aggregation? Not the real deal, despite what AOL and The Huffington Post believe.

But Flipboard sure is one pretty App. Go get it. And then, before you rely on Flipboard to tell you what you need to know, please think.