The Flinch Flinches, Winces, and Stays Tied to Amazon Kindle 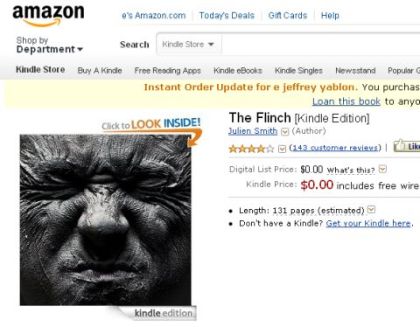 The other day, I received this note from a reader:

Do you know if Julian will be publishing his book on the Nook? I really wanted to read it,but like many others, I won’t be buying a Kindle.

I responded that I didn’t know what Julien Smith’s long-term plans were for The Flinch:

I know that Julien INTENDS to make the book platform-agnostic, as I explained in the article. But from what he’s told me it’s hard to know when that might happen. Domino’s business plans are kind of open-ended on time, if clear on plans.

Not that this is likely to be what you want to hear, but you do know you can get a Kindle APP to read the book, right? And if you’re on a Smartphone or tablet rather than your full computer, that’s actually a lot like using your Nook, anyway!

I was thinking about what I know about this subject, and realized I need to say more. Julien Smith is one of the smartest guys I’ve encountered—one of the smartest guys around—and yet he seems to be falling into the same kind of trap that way too many people, businesses, and prognosticators have been slipping into lately. The Flinch was released almost eight months ago, and whatever you think of the book itself, what was significant (and now it turns out somewhat ironic) was that The Flinch is all about making real business changes and other changes in your life, but so far The Flinch itself is exactly the same as it was at its release; you can only read The Flinch if you use an Amazon Kindle, or Kindle software.

Julien Smith promised change to this late last year when he published The Flinch using Seth Godin’s Domino Project publishing platform. So why is The Flinch still a Kindle-only e-book?

I don’t know. I refuse to believe that Julien Smith and Seth Godin are spewing hot air and putting nothing behind it. And Seth in particular has me scratching my head; at The Domino Project, platform agnosticity seems like it may have fallen by the wayside. While the words “powered by Amazon” were always at The Domino Project, the implied meaning was that Amazon was the server back end—not that Domino Project titles like The Flinch were limited to Kindle format.

Next week I’ll be telling you about the huge business changes that the Google Nexus 7 are a precursor to, and maybe at that point we’ll have an answer to that question that will make Julien Smith flinch.

Business change is difficult. And you need to walk your talk. Stay tuned . . .