The Simplicity. The Agony. The Influency. And Hot Coffee 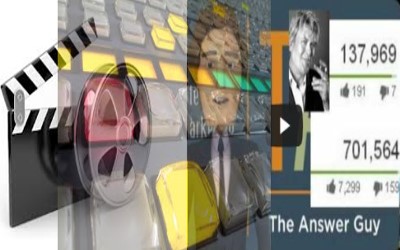 With The Answer Guy’s Daily Influency Videos now rolling out, I find myself being asked a new kind of question regularly: how do you do that? And my answer is starting to sound a lot like influency is as simple as getting a hot coffee … you need to ask the right way.

Last week, we published a video called You Can’t Really ‘Build a Web Site in One Hour. And we see it as a simple, direct message, but the way people respond to the message still depends on the way they hear it. As we’ve said around here for a long time, perception is reality.

So is it easy to create Influency*? You bet. You need a system, though, and the simpler, the better. Doing the “can’t build a web site in an hour” video, for example, took about two hours, start-to-finish, which if you think about it is pretty amazing. In the days when I was The Computer Answer Guy on CBS Television, it took me eighteen hours to put together a six-minute video, not including the several hours of traveling to CBS studios and recording the piece for broadcast.

Now, in just two hours, I wrote the script, recorded the voice track, laid in Bob on the TAG Influency Marketing background, published the video, optimized it for YouTube, added links and extra video elements, and created a page at Answer Guy Central to host the video.

Of course, Bob exists and we’ve boiled re-using him down to a simple business process. YouTube is there, ready to be used by anyone who understands how. We have Answer Guy Central and the pieces that make it up in place. And I’ve been writing for a long time; banging out a quick script is easy for me.

So what does hot coffee have to do with all of this?

Coffee is the kind of thing we take for granted. If you’re a coffee drinker, you know how you like it, whether you prefer hot versus iced coffee, and how to get or make some for yourself. And while I’ve been know to question whether Starbucks is even in the coffee business, and take great exception to the botched influency attempt that is their Android App, any time I want a cup of coffee or creaky Wi-Fi, I know where I can get it easily.

Of course, that means that at Starbucks you move through the line (and there’s ALWAYS a line!), you ask for what you want, and you get the heck out of the way. There’s no room at Starbucks for the kind of back-and-forth I had a few weeks ago with the cashier I deal with regularly at a particular Panera Bread.

You understand my point, right? I guessed that she would get my humor. Thank goodness she did, because there was plenty of room there for misinterpretation with a less-than-hilarious outcome. Oh: and I called her a cashier, didn’t I? Obviously, it’s just not as cool at Panera as it is at Starbucks, or Panera Bread would have Baristas, too. 😉

In putting together the pieces of the Influency puzzle, you need to take a lot of things into account, and the most important one is a clear understanding of your audience and how they want to be spoken to. That one gets tricky, and it’s why we break things down into such precise pieces here. It’s why you can’t really build a web site in an hour.

Influency is simple in its non-simplicity. Plastics, Benjamin, Plastics.