Influency, Literally One Step at a Time 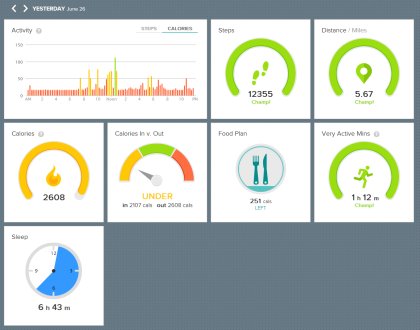 Or, this is a story about a little rubber bracelet and how, like Influency (AS influency) it can change your life, one step at a time.

A month ago, I started wearing a FitBit Flex bracelet. Like other similar “quantified self” devices, FitBit is one of those things you don’t really need unless you’re too oblivious to know a bit about your overall health habits (and then it probably wouldn’t occur to you to plop down $100 to get one), but when I managed to locate one of these hard-to-find little toys I grabbed it. And it’s changed my life.

That’s not necessarily a good thing. Here’s why.

I’ve lost a couple of pounds in the month since I started wearing my FitBit Flex, and that’s more or less in-line with the goal I set for myself when I turned the little thing on. And after I got past the first few days of being fascinated with tracking my every move almost to the point of obsession I’ve stopped spending hours playing with the statistics that the FitBit Flex gives me. Yesterday was a pretty good day; while I burned a few calories less than my Flex expected me to go through, I walked a lot, was plenty active, and ate 250 fewer calories than I was “supposed to”, which itself was a couple hundred calories below my caloric expenditure. And I slept reasonably well, and almost enough.

The FitBit Flex knew all of this, automatically, with the exception of what my intake was, which needs to be entered manually. And that’s where the Influency connection comes in.

At its heart, the Flex (and other FitBit devices) is really nothing more than a pedometer. I’d like to believe it’s a really good pedometer, but because it reports some interesting activity when I drive a car or work out, that issue is one best left for engineers to fight out. As it gathers information about the way and how much its wearer moves, the Fitbit Flex also transmits the information to a computer and on to the FitBit website. It’s truly automatic, and all I have to do is take off the bracelet and charge the FitBit about once a week.

FitBit makes other devices, and to be honest I don’t love having this little black band on my wrist all the time, but it looks like pretty much any other “cause bracelet”, so the FitBit Flex is unobtrusive enough. And because there’s no “did I put it in my pocket or not?” issue or “where do I put this little device when I sleep or shower?” question, for me the Flex is the way to go.

I work pretty hard at staying healthy and in shape. As I mentioned above, the FitBit Flex doesn’t really change my behavior all that much; it’s a reminder to practice pretty much the lifestyle I’ve always lived; get carbs, fat, and protein in myself each day, try not to over-eat, drink plenty of water, and exercise a bit. But because I have to use either my phone, my tablet, or the FitBit website to log my food intake, the numbers are right there in my face a dozen times or more each day; my health is therefore on my mind. The FitBit Flex is almost a part of me. That’s Influency; FitBit is there all the time. Nice for me, great marketing for FitBit.

And while you can pay FitBit $50 per year for “enhanced reporting”, I’ve figured out how to access the FitBit Flex’s statistics directly if I want more information than the FitBit web site shares with me.

Yes, the fact that there’s a database of EXACTLY what I eat each day “out there” is a little unsettling. But I’m a pragmatist, so only a little.

There are a few minor flaws in the way FitBit has implemented the Flex, but this isn’t a product review. If  you’re interested in this kind of thing I believe the FitBit Flex is the way to go.

Mostly, though, I’m impressed by how completely dedicated I’ve become to this dumb little bracelet and the not-really-news it delivers to me. And that’s real Influency.

Want to make Influency for yourself? Contact me here.