Influency’s Road to Hell is Paved With Good Intentions 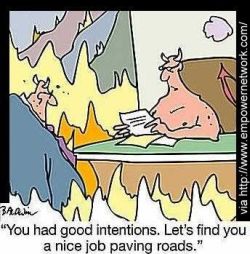 The more I write and speak about Influency, the more places where a need for careful thought and planning matter pop up. You know: exactly the kind of care that politicians don’t seem to know how to put into their work. Which is a painful thing to consider, given the tremendous Influency* that those in political power wield.

Yesterday’s New York Times (speaking of Influency!) included a story about a bill that’s about to become law in California, whereby those under the age of 18 would have the absolute ‘right’ to remove content from web sites. I don’t have a problem with the intent behind this idea, and if there was a way to actually implement it I would support it in all jurisdictions for all people—not only minors. And despite my advancing age there’s still a healthy part of me that wants to stand on a soapbox and scream about what’s right, so I hope you don’t take this as  a cynical rant by an old guy.

But I’m sorry, Senator Steinberg. You and your California legislative cohorts need a reality check.

As I’ve mentioned here before—and by now you know this, right?—once something is ‘out there’ on the Internet, it’s not coming back. Services like Last Night Never Happened don’t work, any more than the spate of ‘send a message and have it self-destruct’ apps can stop a quick screen capture. So the idea of protecting minors from their own indiscretions, while laudable, is simply not productive after the fact. If Senator Steinberg and the California legislature want to protect minors from their own youthful exuberance then they should pass a law prohibiting minors from using the Internet—at all.

Don’t worry, I’m laughing at that idea too.

There are so many permutations to the ways California SB-568 fails to do anything useful, we almost don’t need to get to the point about the burden it places on companies that have information created by minors and requested to be removed by those same minors before they reach the age of majority and who therefore lack independent legal status to begin with (disclaimer: I’m not an attorney) stored on their sites. Sure, we can talk about the powerful influency positions that Facebook, et.al. occupy and why they need to spend some money on public safety issues and maybe should be compelled by legislature to do so, but SB-568 seems to apply to every web site. Oh yeah, and remember; there’s no delete button on the Internet, anyway.

That said, there’s an element to SB-568 that deserves to be law, and beyond the borders of the great state of California: SB-568 makes it illegal to promote goods and services like cigarettes to minors. Joe Camel is illegal in the real world, so of course he should be illegal in the ether and SB-568 takes a crack at that type of advertising. Note though, that the point is that the advertising is illegal to start with; there’s no attempt to undo anything that can’t be undone.

If I thought Senator Steinberg was interested I’d offer her help with Influency Marketing. Presuming, though, that California State Senators don’t engage Answer Guys, I’ll merely extend the offer for a free Influency consultation to you.

Now go pull the plug on your kids’ Internet connections.