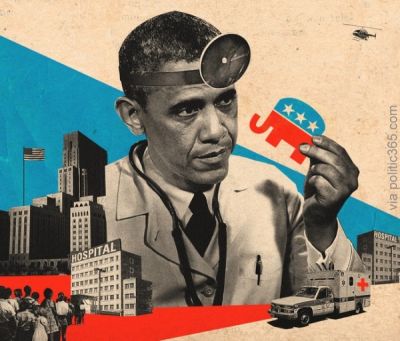 Obamacare is upon us. Ignore, if you can, the specific image of Dr. Obama examining the motives of the Republican party; this piece isn’t meant to be political, and while I support Obamacare, believe our President is just about the best negotiator of all time and generally (but not always) approve of President Obama, I swear I have no political ax to grind. This article is about Influency and Content Marketing.

Last week, one of my Facebook contacts began what quickly turned into an –ahem- spirited discussion. And one of the participants chimed in early by saying I’ve learned the hard way the Facebook may not be the best place for these political discussions.

I disagree. Facebook is the new water-cooler, and despite what many of our mothers told us about discussing sex, religion, and politics, discuss them we do (and yes, I’m aware of the conflict this might cause with some of my writings about things you shouldn’t do on social networks).

I chimed in with an opinion on Obamacare and expected some blow-back, but so far I’ve received none. Here it is:

If I may be so bold: The idea of so ‘simple’ an idea as single payer is where a lot of this goes off the rails. The American public isn’t really against single payer, or Medicare would make a lot more people angry. What the public has an issue with is what they perceive to be the idea behind the word ‘socialism’. I presume that perception has something to do with the misconception that socialism and communism (OH NO, NOT COMMUNISM!!!!) are the same or similar. So without comment on THAT point, here’s the thing: some years back I spent a bunch of time in France—where the socialism model is often taken to what sure does seem to me like silly lengths. If you want to lie around doing nothing and getting paid for it, France is a pretty good place to pull that off. And there really is what amounts to unlimited healthcare there (unlike Obamacare, which promises nothing of the sort … just as Medicare does not). BUT: Even this French socialist medicine still isn’t a true single-payer system, because if you desire you can visit physicians, dentists, etc WHO CHOOSE TO WORK PRIVATELY. Just like we have right now, and just as we’ll still have under Obamacare. So stop picking on Obamacare; it isn’t the devil, and it isn’t even really anything new or improved (or damaged). It’s just an attempt to make sure that people have access to a good enough level of health care to get by, without ruining them.

By the way, I’ve said a couple of nice things about France’s impact on business change over the years. France came up with a pretty good weapon in the war on music piracy and cleverly instituted a tax on advertising in an effort to collect revenue from beyond their borders.

And by the way: no matter how staunchly capitalistic you are, here in the good old USA we have at least one hugely successful business that operates using unmistakably socialist tenets. It’s called The National Football League.

In my next post I’ll be laying out some very specific ideas about the right way to handle your content marketing efforts, and how that changes depending on your goals. Barack Obama is as Influency a soul as walks the earth; he doesn’t need to do Content Marketing, President Obama is Content Marketing and the rest of us help him out even if we’re ‘against’ him—and gain some Influency of our own by doing so. But as we witnessed during his election campaigns, The President has Content Marketing down cold (unlike, say, the US Supreme Court, who also don’t need to worry about their level of Influency … but we would all benefit if they would).

Oh, and by the way: look back at the links I’ve seeded through this piece. You’ll need to understand a bit about that to fully grasp my next article on Long Tail Marketing and Content Management.