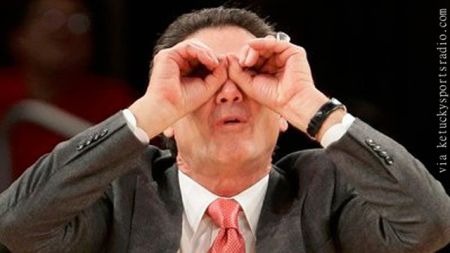 Disclaimer: Despite Appearances, ‘Rick Pitino Is an Idiot’ is Just An Opinion

Rick Pitino is an idiot.

Let me be clear that I have no insight into the highly successful basketball coach’s IQ, and I certainly don’t mean the statement literally. But speaking off the cuff and communicating in a manner that’s designed to get both your attention and that of Google, I state, again, that Rick Pitino is an idiot, because here, in 2014, where social media—difficult as it is to navigate, master, and control—is what it is and Louisville Kentucky basketball coach Rick Pitino sounds like an old man sitting on his porch screaming at kids to stay off his lawn.

Which of course is ridiculous. Rick Pitino is An Idiot.

I can’t take credit for the “Rick Pitino sounds like an old man …” line. I was in the car yesterday, listening to radio (think about that line, by the way; the car is the only place I ever listen to radio any more), and one of the sports radio guys I bequeathed my auditory bandwidth to said it. I don’t even remember who it was, but the line stuck with me. Rick Pitino sounds like a cranky old man, thinking he’s protecting his property but in reality burying his head in the sand. And there is, of course, a huge Influency lesson here.

Sure, when you’re already as  just-plain-known as you need or care to be, there’s no reason to use social media. Your ego is salved. You’re rich. You have nowhere to go but down if you let the little people drag you to their so-obviously-lower-than-you level. I get it Rick; you’re the man and you don’t need us. But the 99.99999% of the world, including most if not all of your players who still have a need to boost their standings, are coming at this from a different place. Their Influency is still not where they want it, and social media is the most efficient way of boosting Influency.

I’ll bet Rick Pitino, a guy who makes $4 million dollars per year, doesn’t think the athletes he coaches deserve to be paid, either.

Mr. Pitino: if you or your people come across this (but why would you? you don’t believe in social media), I hope you’ll contact me; let’s talk Influency. And I hope you’ll see the value in what I’m saying more than basketball writer David Aldrdge did.

For now, my job here is done. I’ll say it one more time: Rick Pitino is an Idiot.