News, Influency, The Speed of Information, and the REAL 1% 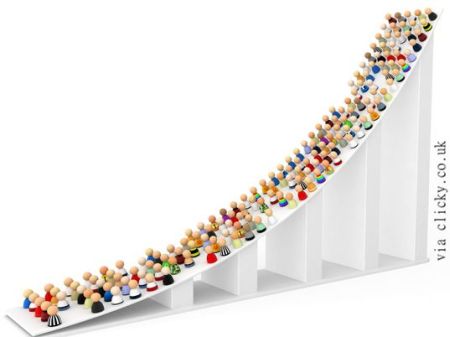 This morning a few things occurred to me that might seem unrelated. They aren’t:

That was a lot. and it all stems from this:

Last night, the world lost Mickey Rooney. I found out by reading this notification in my Facebook feed, courtesy of a guy with a great name who, no, is not me. And I was a bit confused, because I’d thought Mickey Rooney had left us some time ago.

About thirty minutes later, my fiancée—who’d been laboring under the same incorrect understanding of Mickey Rooney’s corporeal condition as I, mentioned his death to me. We had a short conversation about the speed of news; it wasn’t very long ago that she’d have been my first source for the information, but today I was way ahead of her—with ‘way ahead’ being that thirty minutes.

When Did Thirty Minutes Become an Eternity?

A few minutes later I took a look at my Twitter account, and saw that one of my sons had posted an R.I.P. for Mickey Rooney fully eight hours before his passing crossed my field of consciousness:

I was a bit surprised that my twenty-five year old son knew who Mickey Rooney was. I was more surprised that he felt Mr. Rooney deserved the title legend. And then, to underscore the point we’d been discussing earlier about the speed of news, I texted Cathy the link to Mike’s tweet: 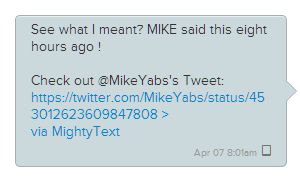 But I didn’t send that text from my phone; I noticed Mike’s tweet while browsing from my desk, and used my computer to redirect the tweet through my phone using a browser plug-in. So a news event got passed around at the speed of Influency, using several mediums, via a third party, through seemingly disconnected devices, including my editorialization about my son’s cognicensce of Mickey Rooney … in seconds. Nothing’s disconnected any more. And Influency is a matter of understanding that, embracing it, and moving fast.

Now reconsider my bullet points at the top of this piece. With so much information coming at us from so many different places, the good/fast/cheap thing, while still true, means nothing unless you’re in people’s faces at the right moment, which means … NOW. Fast has to happen; as an Influency Marketer trying to get peoples’ attention you only get to pick between good and cheap.

Since a few years back when it became a cultural touchstone representing what’s wrong with American society the idea behind the “1%” has been about elitism. Generally that elitism has been expressed in terms of financial superiority, but let’s remove money from the equation; the 1% are really just whomsoever has an advantage over everyone else, and speed is that advantage.

Speed is about a lot of things. How fast your web site loads matters, for example. Being first-to-market (or at least first to start shouting) is important, too. Getting people from point “A” to point “B” quickly—almost before they have a chance to think—is another speed metric that you need to keep your eye on. You’ve likely encountered pop-up windows here, and recently we started laying a bar across the top of Answer Guy Central, asking sometimes for you to opt-in to our e-mail list, and others to click over to special pages like our new project, Video Network One. 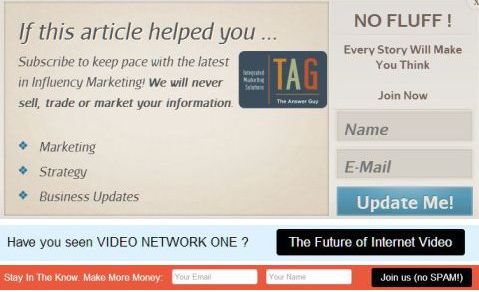 These three formats have a couple of things in common:

Not a lot of margin for error, is it? When we get your attention quickly enough we achieve a one percent success rate. Leading us back to the quantity issue; the more people who see the messages, the more people that one percent represent. And you see the advertisements on the side of this article? Can you guess what our click-through rate is on those? The One Percent aren’t the bad guys; the one percent, in fact are the good guys.

Good, Fast, Cheap, Pick Any Two? You bet; as long as one of the two you pick is FAST. And when Mickey Rooney died and my son not only noticed  but said something, it made me realize what’s really wrong with Neil Young’s Pono Player. It’s good, and it’s cheap enough, but there’s nothing about the Pono Player message that will be fast enough to attract one percent of a meaningful audience.

Sound like a lot to navigate? Say hi; we’ve got your back.