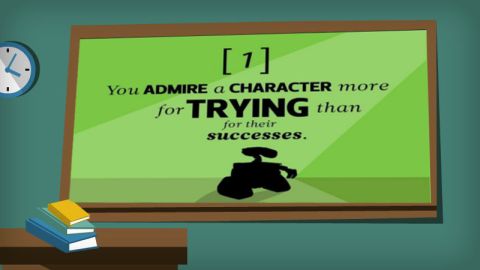 We all know a character or two. Not characters in plays, films, or other stories, but … you know … characters. People with an edge or a story of their own or at least an edge that looks like there’s an interesting story behind it.

What’s Character Purpose in storytelling? Only #1 in Pixar’s 22 Rules for Phenomenal Storytelling.

In film, business, content marketing, and pretty much everywhere, stories aren’t stories unless they include compelling characters. And as important as “compelling” is, relatability is even more so; if people seeing or hearing your story don’t feel a bit of camaraderie with them, your characters will fail—as will the story. Problem is, since people are different, your characters’ relatability needs either to be razor-focused, or broad enough to resonate with your entire audience.

The value of Pixar‘s 22 Rules for Phenomenal Storytelling apply in both mass media and content marketing; the issue is understanding which one you’re producing. Sure, we all want our content to “go viral”, but unless you’re doing the next Toy Story, with producing the content being your only job and it being someone else’s to figure out how to make as much money as possible from your art, you need to define—and focus—your character building on the edge of that razor.

Are you successful at everything you do?

Likely not. And if you were and someone wrote a story about you, would people who heard, read, or saw that story admire you for your success, or—think about this—be jealous of you? The reason Buzz Lightyear and Woody were likable in Pixar’s original Toy Story is because on their way to “success”, through numerous failures, they tried. And tried, and tried, and tried.

Which, by the way, is often what content marketing comes down to, too.