Another Year, Another Customer Service Wall of Shame Entry 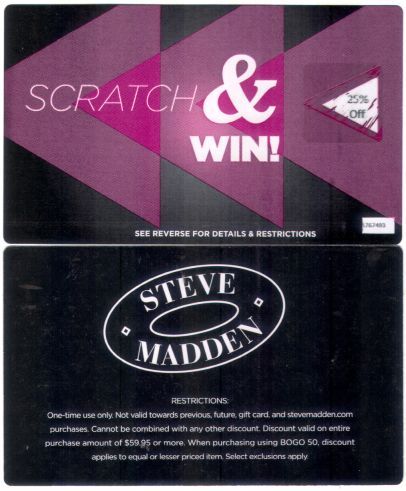 Another year, another entry on The Answer Guy’s Customer Service Wall of Shame.

What better way to start the year? Kudos to Steve Madden for getting my attention; I don’t wear Steve Madden and am more interested in the felony record of Steve Madden himself than the shoe company named for him (Steve Madden stopped working there when he went to jail for stock fraud).

During the Christmas shopping season, I stood next to a friend as she tried to use the coupon you see above at a Steve Madden store, and was told she couldn’t. See the last sentence on the coupon—”Select Exclusions Apply“? How’d you like to pick up an item in a store, stand on line to pay for it, and be told that the coupon you’re holding can’t be used because “the item is too new”?

There’s nothing on the Steve Madden coupon that talks about age. There was nothing in the store that either talked about newness of items in general or indicated that this pair of shoes in particular was ineligible for the coupon discount. In short, my friend was drawn into the store, and then simply denied the discount she had been promised because a Steve Madden employee said so.

That’s not a coupon, it’s a bait-and-switch scenario. And you just can’t do business that way.

OK, so you can, and plenty of less scrupulous businesses still do. But there’s no room for that kind of behavior in a company that wants to still be in business much past 2012. I hate when the fine print on a coupon lists dozens of excluded items, but that’s better than just saying “no, you can’t use your coupon“.

Welcome to The Answer Guy’s Customer Service Wall of Shame, Steve Madden. And welcome to 2012, everybody!