Despite the fact that my Galaxy Nexus SmartPhone has a screen resolution that rivals desktop computers, there are some things that all those pixels just don’t represent very well. For example, here’s Answer Guy Central as seen on the Galaxy Nexus: 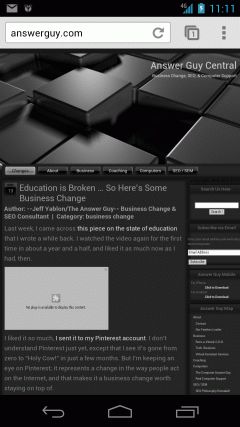 A couple of years ago, we created Android and iPhone Apps so readers wouldn’t have to deal with that. Here’s Answer Guy Central for iPhones:

We lose the native Answer Guy Central formatting, but the overall experience is better. So by dropping any ego associated with how magnificent we might think our web site is 😉 , we give you a better experience.

Now, thanks to some new research by Microsoft, I’m thinking we might be doing away with the Answer Guy Central Apps, soon.

That research suggests that fully 75% of power consumed by SmartPhones is sucked down by the advertisements constantly streaming into them. And as this post at Ziff-Davis points out, there’s a relatively simple solution: stop cramming advertisements down the throats of SmartPhone users.

Because of various financial realities, bringing you iPhone and Android Apps all but requires that we include advertising in them. I can live with the user experience ramifications of that choice; everyone who uses a SmartPhone has gotten used to seeing advertisements in many of their Apps.  It’s accepted. But maybe it shouldn’t be.

Who Says You Need Apps For Everything?

As someone looking to get the words I write in front of as many people as possible, in as many places as I can worm my way into, I like the idea of Apps, for a simple reason: if I can get you to download an Answer Guy Central App, I have a better chance of getting you to return here again and again than if I just hope you’ll stumble upon us in your browser while doing other things. The question is, what am I doing for and to you by giving you Answer Guy Central in an App, instead of just letting you see the site in an app-like way when you happen to find your way here?

And we do that, too, by the way; most SmartPhone users will never see that too-small version of the desktop website in the browsers on their SmartPhones, instead getting something that looks like this, more or less automatically: 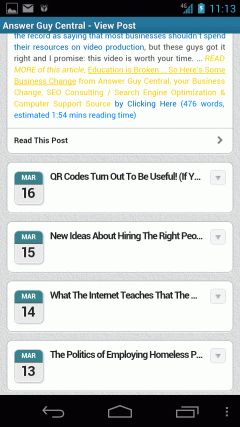 So if I can show you something so App-like as that without eating all your SmartPhone’s battery, what value do I bring to you by giving you that App?

We can get all philosophical about this, a la the words Howard Stern uses in describing his radio programming (“if you don’t like what I’m saying, change the station”); the equivalent here would be “I make both versions available, so you decide what to use”. And therein lies my concern, business-change-wise.

I can take a purely pragmatic approach and believe that by giving you choices I’m doing the right thing. There’s certainly nothing unreasonable about that position. Except I’m pretty sure that most people don’t know enough about this subject to make informed decisions. If I give you that App knowing it’s having so deleterious an effect on your battery life—as Microsoft’s research now suggests—and haven’t explicitly warned you it might do so, I’ve ignored a key fact.

I haven’t tried it again since it was released last year, but this is the kind of thing that made me trash the Starbucks Android App. It ran constantly, eating tremendous amounts of battery power for no reason.

I’m not killing the Answer Guy Central SmartPhone Apps just yet; if you want them, they’re over there in the sidebar. But Business Change is something we practice here as well as preach, so don’t be surprised if sometime soon I voluntarily give up a little control.

And think about how you can manage this kind of business change, too.