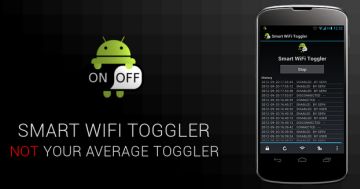 This piece might sound like a commercial  It’s not. As of this writing we’ve never accepted advertising at Answer Guy Central, and while we have occasionally featured affiliate links here, such as our Amazon link for Tim Ferriss’ books, there’s zero recompense today for what might sound like a paid advertisement.

I’m not actually all that excited about what Smart Wifi Toggler seems to do, because as one of the stragglers still on Verizon’s unlimited data plan for my mobile phone, conserving bandwidth isn’t a problem I need to face. And let me be clear that there are other Apps that do even more management of your mobile device’s radio connections, sometimes with pretty great effect.

But Smart Wifi Toggler does something else that none of the utilities I’d tried before it did:

And by “it works”, what I’m saying is that Smart Wifi Toggler not only turns on my WiFi signal when I’m within range of the networks I use, and switches my Galaxy Nexus back to 4G mode when I leave Wifi coverage area, but it’s the first App I’ve ever seen that actually extends my Android 4G battery life.

Just in case you hadn’t noticed, the more advanced cell phones get, the more power they consume. Phone manufacturers are getting smarter about this, implementing new technologies and cramming larger batteries into phones, but if you use a SmartPhone you’ve almost certainly come across the sad reality that you need to be careful how you use it or risk running out of juice before the end of a day. Even my fiancée, now finally using a Smartphone, but mostly just texting and making calls, sometimes runs her phone down to nothing before a day ends.

Toggling your phone off of 4G and onto Wi-Fi doesn’t just save you bandwidth; connecting through WiFi also uses a lot less battery than going through 4G wireless, and saves more still during the times your phone can’t find a good 4G connection and dials itself down to 3G connectivity, or worse.

But in the real world most people don’t remember to switch back and forth at the right times, so “you need an app for that”. And every time you add an app to your phone it sucks a little more power.

Since I installed Smart WiFi Toggler, (and uninstalled the WiFi finding utility I had been using), my battery life has gone from 7 or 8 hours to 12 to 14. That 7-8 hour range was an anomaly; left to its own devices my Galaxy Nexus was good for ten, maybe even eleven hours of not-connected-to-electricity life. But that means that my juice-sucking SmartPhone  is actually better at staying alive with Smart W-Fi Toggler installed and running than it was with nothing running at all.

And that wasn’t even “the purpose” of Smart WiFi Toggler.

I said at the top of this piece that it was going to sound like a commercial for Smart WiFi Toggler, and yes, if you carry an Android SmartPhone I really do want you to click that link to the Google Play Store and download Smart WiFi Toggler. But the real point of this story is that design matters.

You may remember that when we changed the way Answer Guy Central looks early this year I shared some thoughts on whether Apps are even a good idea. Apps can be great, and genuinely useful, but only for special purposes, like, say, ordering from Dominos, or quickly making a restaurant reservation. Dominos’ App is designed exactly as a food ordering App should be, and OpenTable actually works better (i.e., more easily) on a SmartPhone than on a desktop computer. Starbucks, on the other hand, has an App that you want to stay away from—and surprise, that’s about battery issues way more than function.

In short, no you don’t always “need an App for that“.

Design is sometimes about knowing what not to do, then. Finding designers who really “get” web marketing is hard; when we do the big reveal on Influency* you’re going to get access to a cadre of some of the best design and marketing people you can find, anywhere. Design changes for the wrong reason, on the other hand, are a terrible idea.

As business changes, it’s important to keep an eye on the purpose of the changes you put into play. Because while Apple, Microsoft, and Google can afford to throw a lot of garbage against the wall hoping you’ll chase it down, most of the rest of us can’t do business that way.