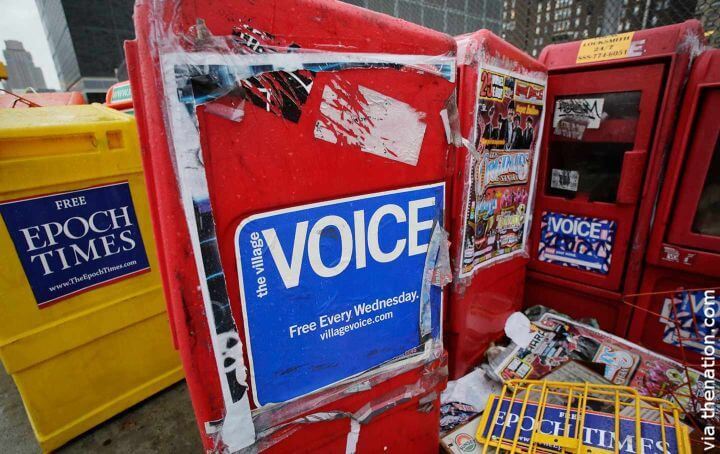 No, wait. The first half of that isn’t quite correct—yet—and the second half isn’t likely to happen in a way that matters. Today’s business change topic is the death of the Village Voice and how it’s being prolonged.

I could tie this idea to any number of marketing tenets, or even talk about the importance of Search Engine Optimization. But none of that could touch the simple reality that at some point The Village Voice’s musical counter-culture roots stopped showing. The Death of the Village Voice is mostly about The Voice no longer having even a semblance of a clear message.

OK, so it’s about money, too, but that’s just business reality for anyone not funded by contributions.

News of The Village Voice’s impending death in the form of a statement that print publication would cease broke about six weeks ago. Having lived in and around NYC for most of my life I know those red street corner boxes well. But it’d been years since I reached inside one until coincidentally I grabbed an armload of Village Voices the week after its impending death was announced. I read it, too, noting mostly that the personal ads that kept The Village Voice afloat several decades ago are mostly gone.

I’d like to say that I grabbed that dozen-or-so copies of The Voice to use in some sort of lesson, but that was only a side effect. I actually needed to wrap some fragile things for a kid-going-back-to-college event and The Village Voice was handy.

The lesson thing happened, though. When I got home my daughetr’s boyfriend was at the house, and asked What’s The Village Voice?

He’s spent most of his life in Manhattan. He’s educated, intelligent, and inquisitive. He even listens to music. In short, this young man was the Village Voice’s target audience, yet somehow he’d managed to completely ignore those red distribution boxes for twenty-one years.

You know where this story is going, right?

I told him what the Village voice is—or was. In predictable old-man fashion I regaled him with a few anecdotes about the good old days. As I said, he’s intelligent and we had a conversation about business and societal changes. At the end of it all I told him these printed papers were going away. And his reaction was predictable. The Village Voice meant nothing and the red boxes meant nothing. The death of the Village Voice simply didn’t matter to him.

Nor, of course, should it. Nor should The Voice’s death matter to pretty much anyone who doesn’t work there. The Village Voice has become irrelevant.

You no longer see people reading The Village Voice on park benches, and the NYC counter-culture scene doesn’t exist anymore. This isn’t to say there’s no “counter culture”, but The Village Voice stopped representing it decades back, and if you grab a copy I’d love for you to tell me what it does represent. Better still, read it on-line and try to sum up The Village Voice’s … voice.