Don’t Be an American Idiot: Two Examples of Business Change

But WOW do I have issues with Foursquare.

On the good side: as a long-time Green Day fan and coming from the position that American Idiot is one of the best examples of the Rock Opera Genre behind perhaps only The Who’s Tommy, I was worried that having the music Broadway-ized would ruin it. It didn’t. My review of American Idiot on Broadway is simple: see it. The music was fun, the production was amazing, and while I didn’t care for a couple of the performances, John Gallagher Jr. was simply fantastic.

Staging American Idiot this way was a business change that worked. I’ve always felt that Green Day’s Billy Joe Armstrong is too impressed with himself and seeing this show only firmed that up for me, but . . . American Idiot on Broadway was great and deserves a nice long business-successful run.

Now onto the real issue:

When we got to the theater I checked into Foursquare. In fact, I checked in three times, because that’s how many copies of the Saint James Theater are in the Foursquare database: 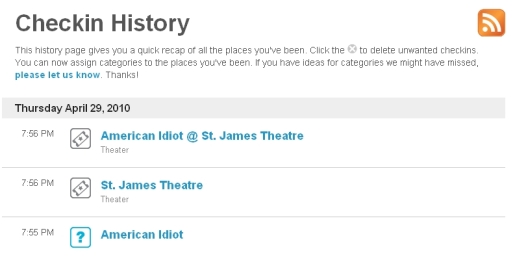 I’ve written a few times about Foursquare. Despite growing very quickly and looking like the clear leader in its space I think Foursquare is still just a toy and may never really become anything more than that. And unless they clear up the problem of having multiple entries in their database for the same thing they won’t ever be taken seriously by the businesses they’re now trying to do business with and be taken seriously by.

And never mind that Foursquare scolded me and took away points when I covered myself against the flaws in their system. Yes, really.

Business change is  about . . . well, change. Green Day’s American Idiot on Broadway is a good business change—if by no means a definitive one. Foursquare needs to start taking their business change a lot more seriously, or the business change that they’ll be remembered for will be fading into oblivion.