When Steve Jobs announced his resignation as CEO at Apple two night ago, the business press all but stopped talking about anything else. And Steve Jobs has had so great an impact on the way what I’ll sum up simply as “computing devices” work that this tribute to a genuine visionary makes sense. I can’t think of anyone who’s changed business more than Steve Jobs, no matter my discomfort with Apple’s business practices and misgivings with most of Apple’s products.

But I wasn’t going to write about Mr. Jobs resignation and the presumed deterioration of his health. Everyone’s writing about the business change and although I could had generated some traffic by doing so I didn’t want to throw up a “RIP Steve Jobs” headline just to cut through the cacophony. You just didn’t need my two cents on this one. 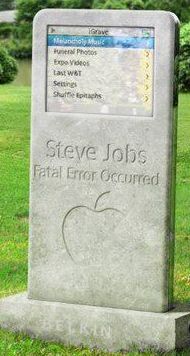 Then I read a piece by Chris Brogan that changed my mind.

I’ve been critical of Chris recently. I took exception to Brogan’s thoughts on authenticity just a couple of weeks ago, and questioned Chris’ intelligence as compared to the more direct Gary Vaynerchuk a few months back. In both cases, I heard from Chris Brogan; he wasn’t pleased.

I’m happy to report that Chris Brogan seems to have been refocusing himself. His post today on “taking back your strings” is as raw and real as anything I’ve read in a long time. And that piece on “until” … well, let’s talk until. Until you understand until, you can’t make meaningful business change.

Until Steve Jobs lost a power struggle with the man he had hired to replace himself as Apple’s CEO, he didn’t really understand business change.

Until Steve Jobs created a competing computer company in NeXT, set prices so high that he wasn’t able to sell more than a few of the high-powered-but-not-viable boxes, but managed to get the attention of the company he really loved and sold NeXT back to them, Apple was lost.

Until the iPod, the digital music player made no sense

Until the digital music player was subsumed by multi-purpose SmartPhones, Apple owned the market. Of course, the iPhone was first, there.

Maybe he didn’t intend this, but Chris Brogan paid tribute to Steve Jobs, one of the great business change visionaries of all time, with these words:

Most of us ward off our “untils,” but what if you didn’t? What would life be like? How would you see the world, if you were at least open to the possibilities of your until?

Find your until. And make something of it.

Thank you, Steve Jobs. And thank you, Chris Brogan, for providing me some perspective this week.

RIP Steve Jobs? No, not for a long, long time.